The Effect of Socializing During Exercise on Psychological Need Satisfaction, Motivation to Exercise, and Wellbeing 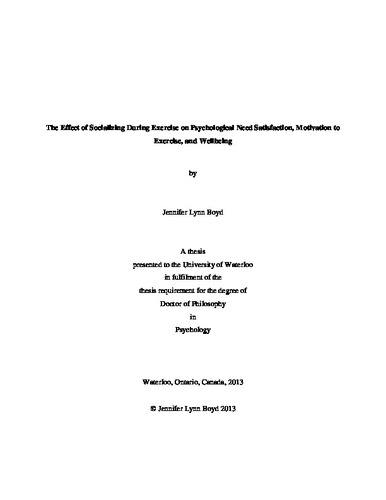 Previous research has indicated that exercising with other people improves interest and engagement in physical activity (e.g., Christensen, Schmidt, Budtz-Jorgensen, & Avlund, 2006; Estabrooks & Carron, 1999). However, the degree of socializing with other people engaged in by exercisers has not been manipulated in previous studies. In the present study, the amount of socializing during exercise was manipulated in order to evaluate the effect of social connection on motivation to exercise. Two perspectives on the role of socializing in exercising were considered and discussed – Social Facilitation (Zajonc, 1965) and Self-Determination Theory (SDT; Deci & Ryan, 2000). In order to test the importance of social contact during exercise, previously inactive women between the ages of 18-30 were randomly assigned to exercise for 12 sessions in one of three conditions. In the “social partner condition”, two participants exercised together and also discussed personal topics. In the “non-social partner condition”, two participants exercised together, but did not discuss personal topics. Lastly, in the “exercise alone condition”, participants exercised alone. In general, it was hypothesized that the social partner condition would lead to the greatest improvements in satisfaction of the psychological need for relatedness, subjective vitality, motivation to exercise, amount of physical activity, fitness level, affect, interest, and effort in exercise. Non-social partners were expected to experience some benefits from exercising with a partner, but not to the same extent as those in the social partner condition. Participants who exercised alone were expected to experience the fewest improvements. The partner relationships were also examined more closely, with the expectation that pairings that were more interpersonally complementary (that is, more similar on affiliation, and reciprocal on dominance) would positively affect outcomes. Further, partners were expected to become more similar in their exercise behaviour and motivation due to their repeated interactions over the course of the study. A one-month follow-up session assessed whether motivation and exercise behaviour observed at the end of the study changed or were sustained over time. The hypotheses were partially supported. Overall, exercise contributed to improved vitality, fitness, and affect, with few differences amongst the conditions. Participants in both partner conditions reported greater relatedness, or social connection, after a month of exercising together, than the exercise alone condition participants. Some interesting motivational patterns emerged at the end of the study and at a one-month follow-up, with some indication that the social partner condition most greatly benefited motivation. Interpersonal complementarity positively impacted competence, relatedness, and fitness, but surprisingly had a negative impact on vitality. Partners did not become more similar to one another over the course of the study, suggesting a lack of mutual influence. The findings are discussed within the context of Self-Determination Theory and Social Facilitation. These findings contribute to a growing body of literature that indicates that the social aspects of physical activity are essential for physical and mental wellbeing. Further research is required to evaluate how social factors can be utilized to promote greater enjoyment of and adherence to physical activity.

Jennifer Lynn Boyd (2013). The Effect of Socializing During Exercise on Psychological Need Satisfaction, Motivation to Exercise, and Wellbeing. UWSpace. http://hdl.handle.net/10012/7628