Potential Applications of Silk Fibroin as a Biomaterial 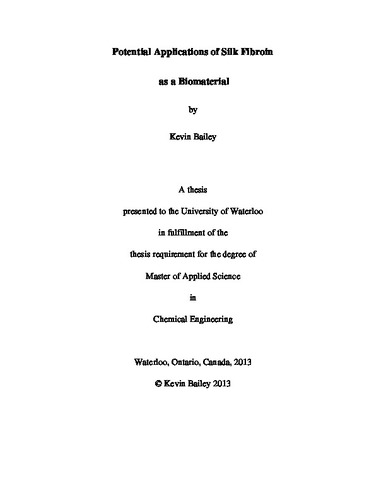 Fibroin is a biopolymer obtained from the cocoons of the Bombyx mori silkworm that offers many unique advantages. In this thesis work, fibroin was processed into a regenerated film and examined for potential biomaterial applications. The adsorption of bovine serum albumin onto the fibroin film was investigated to examine the biocompatibility of the film, and it was found that BSA adsorption capacity increased with an increase in BSA concentration. At 10 mg/mL of BSA, the BSA sorption reached 0.045 mg/cm2. This level of BSA is indicative of good blood compatibility and biocompatibility of the fibroin. The gas permeabilities of oxygen, nitrogen, and carbon dioxide were tested for potential applications in contact lenses and wound dressings. Over a pressure range of 70 – 350 psig, the permeability of oxygen and nitrogen was 5 Barrer, while that of carbon dioxide ranged from 26 to 37 Barrer. The oxygen transmissibility of the fibroin films prepared in this study was on the low end required for use in daily wear contact lenses, but sufficient to aid the healing process for use in wound dressings. The permeability and diffusivity of four model drugs in the fibroin film was investigated for potential applications in controlled drug release. The permeability at higher source concentrations leveled out to 0.8 – 4.3 x 10-7 cm2/s depending on the drug tested. The diffusion coefficient determined from sorption experiments was approximately 1.8 x 10-9 cm2/s, while the diffusion coefficients from desorption experiments were determined to be 0.8 – 2.7 x 10-9 cm2/s. The magnitude of the drug permeability and diffusivity are consistent with many other controlled release materials, and the fibroin film showed good potential for use in controlled release.