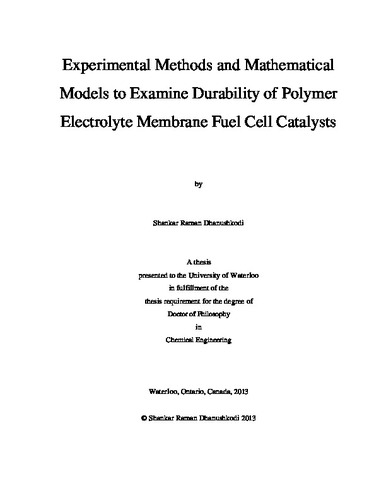 Proton exchange membrane fuel cells (PEMFC) are attractive energy sources for power trains in vehicles because of their low operating temperature that enables fast start-up and high power densities. Cost reduction and durability are the key issues to be solved before PEMFCs can be successfully commercialized. The major portion of fuel cell cost is associated with the catalyst layer which is typically comprised of carbon-supported Pt and ionomer. The degradation of the catalyst layer is one of the major failure modes that can cause voltage degradation and limit the service life of the fuel cell stack during operation. To develop a highly durable and better performing catalyst layer, topics such as the causes for the degradation, modes of failure, different mechanisms and effect of degradation on fuel cell performance must be studied thoroughly. Key degradation modes of catalyst layer are carbon corrosion and Pt dissolution. These two modes change the electrode structure in the membrane electrode assembly (MEA) and result in catalyst layer thinning, CO2 evolution, Pt deposition in the membrane and Pt agglomeration. Alteration of the electrode morphology can lead to voltage degradation. Accelerated stress tests (ASTs) which simulate the conditions and environments to which fuel cells are subject, but which can be completed in a timely manner, are commonly used to investigate the degradation of the various components. One of the current challenges in employing these ASTs is to relate the performance loss under a given set of conditions to the various life-limiting factors and material changes. In this study, various degradation modes of the cathode catalyst layer are isolated to study their relative impact on performance loss ‗Fingerprints‘ of identifiable performance losses due to carbon corrosion are developed for MEAs with 0.4 mg cm−2 cathode platinum loadings. The fingerprint is used to determine the extent of performance loss due to carbon corrosion and Pt dissolution in cases where both mechanisms operate. This method of deconvoluting the contributions to performance loss is validated by comparison to the measured performance losses when the catalyst layer is subjected to an AST in which Pt dissolution is predominant. The limitations of this method iv are discussed in detail. The developed fingerprint suggests that carbon loss leading to CO2 evolution during carbon corrosion ASTs contributes to performance loss of the cell. A mechanistic model for carbon corrosion of the cathode catalyst layer based on one appearing in the literature is developed and validated by comparison of the predicted carbon losses to those measured during various carbon corrosion ASTs. Practical use of the model is verified by comparing the predicted and experimentally observed performance losses. Analysis of the model reveals that the reversible adsorption of water and subsequent oxidation of the carbon site onto which water is adsorbed is the main cause of the current decay during ASTs. Operation of PEM fuel cells at higher cell temperatures and lower relative humidities accelerates Pt dissolution in the catalyst layer during ASTs. In this study, the effects of temperature and relative humidity on MEA degradation are investigated by applying a newly developed AST protocol in which Pt dissolution is predominant and involves the application of a potentiostatic square-wave pulse with a repeating pattern of 3s at 0.6 V followed by 3s at 1.0 V. This protocol is applied at three different temperatures (40°C, 60°C and 80°C) to the same MEA. A diagnostic signature is developed to estimate kinetic losses by making use of the effective platinum surface area (EPSA) obtained from cyclic voltammograms. The analysis indicates that performance degradation occurs mainly due to the loss of Pt in electrical contact with the support and becomes particularly large at 80°C. This Pt dissolution AST protocol is also investigated at three different relative humidities (100%, 50% and 0%). Electrochemical impedance spectroscopy measurements of the MEAs show an increase in both the polarization and ohmic resistances during the course of the AST. Analysis by cyclic voltammetry shows a slight increase in EPSA when the humidity increases from 50% to 100%. The proton resistivity of the ionomer measured by carrying out impedance measurements on MEAs with H2 being fed on the anode side and N2 on the cathode side is found to increase by the time it reaches its end-of-life state when operated under 0 % RH conditions.