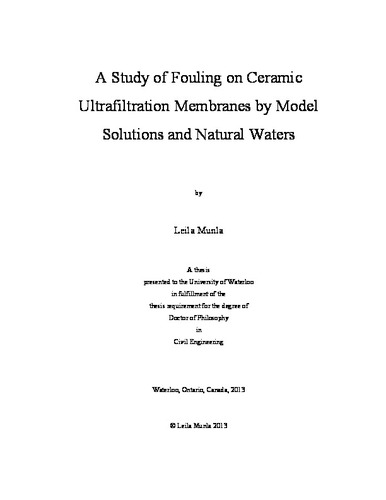 Over the last decade polymeric membranes have emerged as an economically viable treatment option to produce drinking water. Due to higher capital costs, the use of ceramic membranes has generally been limited to industrial applications that deal with challenging water quality. Ceramic membranes are superior to polymeric membranes in their physical and chemical resistance, which allows for higher fluxes and backwash pressures as well as rigorous chemical cleaning. As a result, these membranes can potentially operate for longer periods of time, which can decrease the lifetime cost of the membrane. Furthermore, decreased production costs coupled with an increased desire for economical sustainability may open the door for the use of ceramic membranes in drinking water treatment, particularly for highly polluted waters. The loss of membrane permeability as a result of fouling remains one of the biggest challenges for sustainable membrane operation. Therefore, a thorough understanding of fouling behavior and the identification of key foulants is essential for optimizing membrane performance. However, fouling has not been researched in detail for ceramic membranes in drinking water treatment, particularly ultrafiltration, since most research has focused on ceramic microfiltration membranes combined with coagulation. The thesis is divided into four main stages. The first stage involved developing a factorial design to establish a procedure to determine sustainable flux that can adequately compare the fouling between a ceramic and polymeric membrane without compromising the functional potential or operating parameters of either membrane. In this stage, the significance of three different variables (interval length, increment increase, and a hydraulic backwash) in determining sustainable flux were statistically analyzed following a factorial design and consequently included or removed from the sustainable flux determination approach. The increment increase was not significant while the backwash was the most significant variable. The method established was used in later experiments to allow for a comparison of fouling behavior and performance between a polymeric and ceramic membrane. The second stage investigated the fouling behavior of flat-sheet ceramic membranes with model solutions at constant pressure to identify foulants of concern and likely fouling mechanisms for ceramic membranes as well as perform surface characterization techniques not possible with tubular membranes. In this stage the contributions of different model foulants (bovine serum albumin i.e. a protein, alginate i.e. a carbohydrate, humic acid, and colloidal silica) to reversible and irreversible fouling on a flat-sheet ceramic membrane at constant pressure were quantitatively evaluated. Both single foulant solutions and all possible combinations of mixtures of model foulants were investigated. The bovine serum albumin and humic acid were main contributors to hydraulically irreversible fouling and their removal mechanism is postulated to be largely through adsorption. Colloidal silica was the most influential factor governing fouling behavior and diminished the irreversible fouling effect of these organics, thus increasing hydraulic reversibility. Additionally, synergistic fouling effects were also observed. The third stage investigated the same model solutions with tubular ceramic membranes at constant flux to determine the fouling behavior under different conditions and quantitatively assess the effectiveness of different fouling mitigation techniques. The rate of fouling was very high for bovine serum albumin but extremely low for humic acid; however, they both showed high irreversible fouling. The results obtained were consistent with the previous stage using flat-sheet ceramic membranes; particularly regarding the significant role colloidal silica plays in fouling. The ability to compare these two very different configurations and operating parameters is largely due to the use of a hydraulic backwash in both configurations. Therefore, this highlights the importance of investigating fouling reversibility, especially in simplified experiments. The last stage investigated tubular ceramic fouling behavior and organic matter rejection with surface water at constant flux. Tubular ceramic membrane fouling behavior was investigated for river water. A very high initial organic carbon removal was observed at the initial stages of filtration and after each backwash cycle indicating a high affinity of organics to the membrane surface as well as partially reversible adsorption. Humic acid rejection decreased throughout the filtration cycle. On the contrary, biopolymer rejection remained constant indicating size exclusion as a primary removal mechanism. After several modifications to the design and setup, the sustainable flux method established in Stage 1 could not be applied to the ceramic membrane or to the polymeric membrane using highly turbid water; a few hypotheses were made as to why this occurred. It is likely that one or more variables that were not included in the sustainable flux method were influencing the fouling rate over time. Overall, the robustness of ceramic membranes opens the door for some creative fouling mitigation techniques to be used such as backwash pulses and chemical maintenance cleaning.