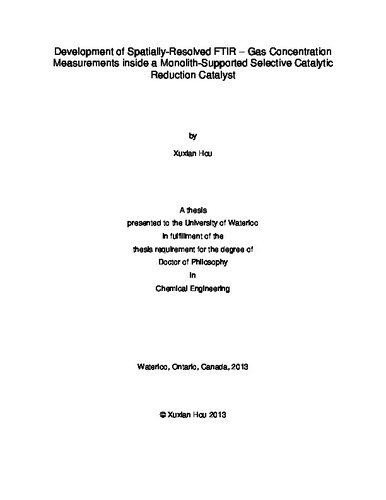 The diesel engine is growing in popularity due to its energy efficiency and solving the emissions issues associated with diesel engine exhaust would clear the way for further growth. The key pollutants are NOx, particulate matter and unburned hydrocarbons. Selective catalytic reduction (SCR) catalysis is likely the best choice for NOx control. In SCR, NH3 selectively reacts with NOx to form N2 – the selectivity refers to NH3 reacting with NOx instead of the abundant O2. Urea is used as the NH3 source, being injected into the exhaust as an aqueous solution where the urea decomposes and NH3 is generated. Spatial resolution characterization techniques have been gaining attention in the catalysis field because of the higher level of information provided. In this thesis, a new spatial resolution technique, called SpaciFTIR (spatially-resolved, capillary-inlet Fourier transform infra-red spectroscopy), was developed, which overcomes the interference of water in the detection of NH3 in an earlier developed technique, SpaciMS (spatially-resolved, capillary-inlet mass spectrometry). With the new test method, three SCR topics were addressed. First, the three key SCR reactions were spatially resolved. These are the standard SCR reaction (2NO + 2NH3 + 1/2O2 = 2N2 + 3H2O), the fast SCR reaction (NO + NO2 + 2NH3 = 2N2 + 3H2O), and NO2-SCR, (6NO2 + 8NH3 = 7N2 + 12H2O). Results show that in the presence of NO2, but at a NO2/NOx ratio < 0.5, the fast SCR reaction proceeds followed by the standard SCR reaction, i.e. in series. If the NO2/NOx ratio exceeds 0.5, the NO2-SCR and fast SCR reactions occur in parallel. Compared to the standard integral test method, this spatial resolution technique clearly showed such trends. Secondly, the spatial resolution technique was used to characterize the effects of thermal aging on catalyst performance. It was found that for a highly aged catalyst, there was a radial activity profile due to an inhomogeneous temperature distribution in the process of aging. Aging effects on various key SCR reactions, i.e. NO oxidation, NH3 oxidation, and the reduction reactions, were studied. Last but not least, for the purpose of passive SCR system development, transient NH3 storage profiles along the monolith channel were measured with SpaciFTIR. Passive SCR is a system where the NH3 is generated on an upstream catalyst, such as a three-way catalyst or lean-NOx trap, instead of via urea injection. In such a system, NH3 is therefore not constantly being fed to the SCR catalyst, but “arrives” in pulses. Factors such temperature, NH3 concentration, pulsing time, flow rate and thermal aging were investigated. For the first time, NH3 migration was observed and its effect on SCR reactions along the length of catalyst was studied.