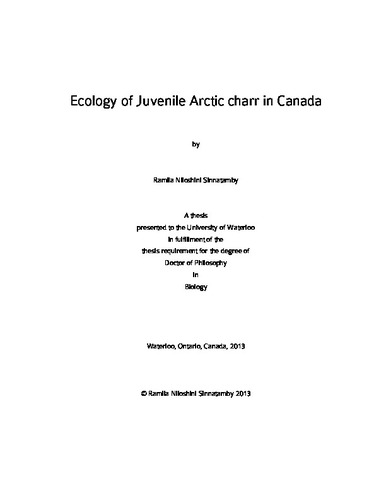 Increases in global temperatures resulting from climate change have raised concern over potential responses of Arctic charr, <i>Salvelinus alpinus</i>, a cold-adapted freshwater/anadromous fish species in the salmonid family. While various aspects of adult Arctic charr ecology are well established, juvenile, and in particular, young-of-the-year (YOY) ecology is less well understood. The study of early life stages is important because of implications for subsequent population dynamics as well as their particular sensitivity to climate change. In this thesis, I aimed to broaden the scope of knowledge on juvenile Arctic charr from Canadian populations with a particular emphasis on YOY, and thermal habitat use through four studies. An intensive study of juvenile Arctic charr from Lake Hazen, Nunavut, demonstrated a preference during the summer for stream environments, particularly those fed by warm upstream ponds. Charr occupying both stream and nearshore lake habitats were found to feed similarly, with chironomids occurring most frequently in diets. Some older stream-dwelling charr preyed on smaller, younger Arctic charr. Preferred stream occupancy is likely mediated by physical barriers created mainly by water velocity, and by distance from the lake, lake-ice dynamics, low water depth, and turbidity. Water velocities and possibly intercohort competition resulted in stream habitat segregation by size, with YOY mainly found in low velocity pools and back eddies adjacent to stream banks, but not in water velocities greater than 0.1m/s. Greatest charr densities in streams were found in small, shallow, slow-flowing side channels, which are highly susceptible to drought. A discriminant function analysis model based on carbon and nitrogen stable isotope values was used to identify offspring of piscivorous large-form and non-piscivorous small-form Arctic charr morphotypes from Lake Hazen, Nunavut. The adult morphotypes were estimated to contribute approximately equally to the YOY population, however, the morphotype offspring were differentially distributed among sampled nursery sites. Unequal distribution corresponds with prerequisites suggested for the evolution of trophic specialists within a single population that experiences assortative mating based on trophic specialization. An assessment of growth rates and otolith-inferred metabolic rates obtained from YOY from 23 populations over a 27˚ latitudinal gradient demonstrated latitudinal variability consistent with countergradient variation where northern populations demonstrated faster growth and higher metabolic rates compared to southern populations. Countergradient variation (CGV) is defined as genetic variation that counteracts the negative influences of the physical environment, minimizing phenotypic variability along a gradient. Otolith-inferred metabolic rates from free-living animals reflect the average daily energy expenditure of the organism, which incorporate the energetic costs of standard metabolic rate (SMR) and other processes such as feeding, locomotion, thermoregulation, reproduction and growth. As such, variations in otolith-inferred metabolic rates may reflect a combined increase in feeding, activity and SMRs in northern populations. Nevertheless, the phenotypic variation in physiological traits observed here demonstrates the significant adaptability of Arctic charr to different thermal regimes with different growing season lengths. Otolith-inferred temperatures and fork lengths at capture from YOY from two proximal fluvial and lacustrine sites in Labrador were used to compare growth and thermal habitat use between habitat types. Otolith-inferred temperatures were not significantly correlated with air temperatures, suggestive of behavioural thermoregulation by YOY at both sites. The majority of YOY from Kogluktokoluk Brook (fluvial) were found using temperatures consistent with laboratory determined preferred temperatures for juvenile Arctic charr, whereas most Tom’s Pond (lacustrine) YOY were found using temperatures ranging between preferred temperatures and optimal temperatures for growth. Otolith-inferred temperatures were only correlated to fork lengths in Tom’s Pond YOY. The lack of correlation in Kogluktokoluk Brook YOY may reflect resource partitioning occurring as a result of territoriality known to occur among stream salmonids. The limited range of temperatures used by fluvial YOY in this study, particularly the lack of cooler temperatures, suggests that fluvial YOY may face barriers to accessing thermal refugia, and as a result may be particularly vulnerable to climate change. Examining the ecology of juvenile Arctic charr from Canadian populations over a number of spatial scales (i.e. latitudinal, regional and local) highlighted the considerable phenotypic plasticity demonstrated by the species. While physiological plasticity observed over the latitudinal gradient reflected the ability for juvenile Arctic charr to utilize different thermal regimes, the regional comparison between habitat types demonstrated that the ability for juvenile Arctic charr to respond to climate change is likely to vary between habitat types. Further, on a local scale, behavioural plasticity was observed, but was found to be influenced by several regulatory factors. The study of the ecology of juvenile Arctic charr in this thesis has highlighted various factors affecting juvenile Arctic charr in Canada: temperature, water velocity, cover, maternal influences, habitat type and ration. The relative contributions of these factors as well as others which were not directly testable in this thesis (e.g. variability in standard metabolic rate, the role of genetic adaptation) are likely to vary with latitude, populations and habitat types. Deciphering the relative roles of these factors will allow better predictions of responses to climate change.