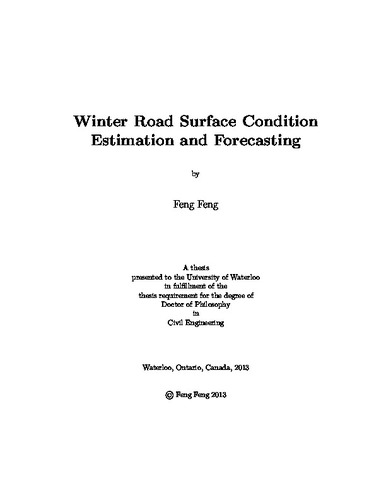 This thesis research has attempted to address two challenging problems in winter road maintenance, namely road surface condition (RSC) estimation and forecasting. For RSC estimation, the goal of the research was to develop models to discriminate RSC classes based on continuous friction measurements (CFM) and other available data such as temperature and precipitation history. A systematic exploratory study was conducted on an extensive field data set to identify the categorical relationship between RSC and various aggregate CFM measures, such as those related to probability distribution and spatial correlation. A new multi-level model structure was designed, under which binary logistic regression models were calibrated and validated utilizing several carefully chosen aggregate measures to classify major RSC types. This model structure was found to be effective in capturing the overlapping nature of CFM ranges over different RSC types -- a problem which has not been addressed adequately in the past studies. An alternative model with support vector machine (SVM) was also developed for benchmarking the performance of the proposed logit model. It was found that the two types of models are comparative in performance, confirming the high performance of the proposed multi-level model. For road surface condition forecasting, a novel conceptual framework for short-term road surface condition forecasting is proposed, under which the short-term changing process of surface temperature, friction level and contaminant layer depths, is comprehensively explored and analyzed. This study framework is designed to consider all important conditional factors, including weather, traffic and maintenance operations. The maintenance operations, especially salting, are handled by loosening the strict Markovian assumption, i.e., a history instead of one single time interval of salting operations is considered. In this way, the variation of snow/ice melting speed caused by both residual salt amounts and salt/contaminant mixing states is incorporated in the forecasting model, which enables accurate short-term forecasting for contaminant layers. This approach practically circumvents a major limitation of previous studies, making the post-salting RSC forecasting more reliable and accurate. Under the proposed model framework, several advanced time series modelling methodologies are introduced into the analysis, which can capture the highly complex interactions between RSC measures and conditional factors simultaneously. Those methodologies, especially the univariate and multivariate ARIMA methods, are for the first time applied to the winter RSC evolution process. The forecasting errors of surface temperature, friction level and contaminant layer depths are all found to be small, implying that both the proposed study framework and the resulting solutions closely match the real-world observations. The proposed forecasting models are simple in structure, easy to interpret and mostly consistent with physical knowledge. Compared to the existing models, the proposed models provide extra flexibility for refactory, tuning and deployment. Furthermore, all the modelled RSC measures are numerical and the forecast errors are relatively small, suggesting empirical models could be an efficient alternative to physical models. With the well-designed modelling methods, the resulting empirical models as calibrated in our study can be implemented into a decision support and simulation tool with high temporal resolution and accuracy.