Innovative Shear Connections for the Accelerated Construction of Composite Bridges 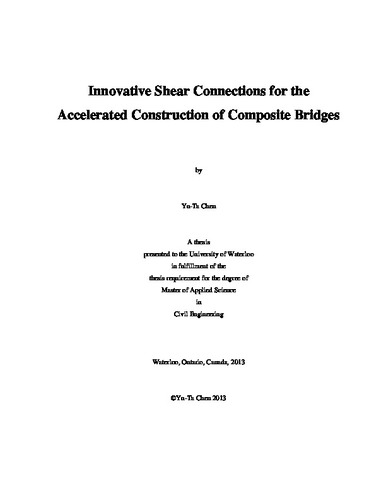 Accelerated bridge construction methods are being progressively used to construct and replace bridges in North America. Unlike traditional bridge construction methods, accelerated bridge construction methods allow bridges to be built in a shortened period of time on the construction site. These methods reduce the road closure time and the traffic disruption that are associated with bridge construction. One of these methods is carried out by prefabricating the bridge elements offsite and then assembling them onsite in a time-efficient way to build the bridge. This construction method can be used to build steel-precast composite bridges, where steel plate girders are connected to full-depth precast concrete deck panels. For the expeditious construction of composite bridges, a proper shear connection detail is needed to develop composite action between the steel plate girders and the precast concrete deck panels. This research project investigated two types of shear connection that would accelerate the construction of steel-precast composite bridges. First, finite element analysis was used to study the behaviour of composite bridge girders with panel end connections. The girders were analyzed for their load-displacement behaviour, cross-sectional stress and strain profile, and connection force distributions. Secondly, experimental push tests were conducted to study the load-slip behaviour of bolted connections. The effects of steel-concrete interface condition, bolt diameter and bolt tension on the shear capacity of bolted connections were analyzed. Based on the finite element analysis results, it is concluded that the panel end connected girder exhibited strong composite action at service and ultimate load. The level of composite action decreased slightly when the panel end connection stiffness was reduced by a factor of ten. Based on the experimental results, it is concluded that the total shear capacity of the bolted connection is the sum of the friction resistance and the bolt dowel action resistance. The friction resistance of the connection depends on the interface condition and the bolt clamping force. An analytical model that can predict the ultimate shear capacity of bolted connections has been developed and recommended. The proposed model is shown to give reliable predictions of the experimental results. It should be noted that bolted connections exhibit good structural redundancy because the bolt fracture failures do not happen simultaneously.