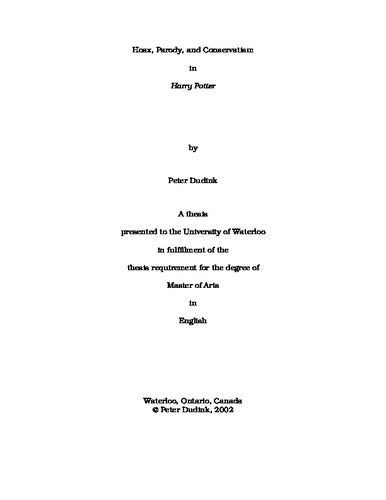 This essay examines the ideology or value system implicit in Joanne Rowling's Harry Potter series. Many of the images in the series, despite being fantastic or empirically unprecedented, are minor transformations of popular books and of our very common physical and cultural reality. However, these imaginative transformations of mundane reality actually imitate, reiterate, and conserve common and contemporary secular values. On a third level the thesis will show that this conservation of contemporary secular values is undermined by a cynical and very subtle transformative element of satire, parody, and criticism. Depending on the theme explored by the particular chapter, a different level of meaning might be evident. Chapter One discusses Rowling's parody of popular secular values. Chapter Two focuses on her parody of Christianity. Chapter Three focuses on Rowling's representations of nature and technology and on her parodic reversal of their traditional representation in similar literature. Chapter Four discusses how Rowling has made a critical appropriation of popular culture's reliance on thoughtless and 'instant' solutions, and discusses how she has made a mockery of her own hero, Harry Potter. The conclusion discusses the value of literary devices that transform literal meanings and verbal images into new meanings and images, and concludes that Harry Potter should be read cautiously. A second conclusion is that the author's claim the series is incomplete is a hoax. This argument is defended with a demonstration that the existing four Harry Potter books form a complete unit, and with a reminder that an element of hoax pervades Rowling's entire series.