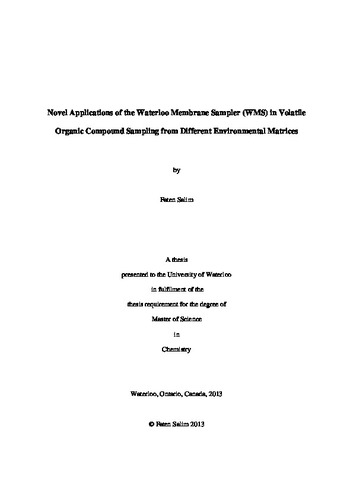 The Waterloo Membrane Sampler (WMS) is a polydimethylsiloxane (PDMS)-based permeation passive sampler developed at the University of Waterloo. This sampler has found numerous applications in the sampling of volatile organic compounds (VOCs) from air and soil gas. In the presented thesis, studies were conducted to expand the WMS applicability to different environmental matrices. In the first part of this work, a modified version of the sampler, with a smaller area of the sampling surface, was calibrated towards seventeen VOCs listed as sources of concern in guidance documents for vapor intrusion. The calibration constant values obtained at different exposure periods demonstrated high reproducibility and independency of the exposure time. Furthermore, the application of the WMS for VOC sampling from groundwater was examined. This study involved seven VOCs considered as important groundwater pollutants. The performance of the sampler was examined at different concentration levels and for different exposure times. The effects of the sorbent type and bubble formation at the surface of the membrane on the sampling efficiency were evaluated in order to optimize the performance of the WMS. A hypothesis regarding the calibration constant values in water sampling compared to their values in air sampling was examined. The WMS demonstrated linear uptake of the targeted compounds over the studied periods of time and at different concentration levels. Very low detection limits were achieved for all studied compounds. The calibration constant values for the sampler towards the studied compounds were measured with a reasonable reproducibility. Nonetheless, the experimental values of the calibration constants in water sampling did not comply with the theory. Furthermore, a new method of bulk soil sampling was tested. In this approach, the soil sample is enclosed in a container along with the WMS placed in the headspace of the sample. The capability of the WMS to perform exhaustive extraction of volatile organic compounds trapped in the sample was tested in this case. Two compounds, TCE and PCE were used as model compounds to test the introduced method. The initial experiments involved sampling from spiked sand soil as the simplest scenario. The experimental setup was evaluated and modified accordingly to achieve the desired extraction. The effects of the exposure parameters on the extraction efficiency were examined through experimental design starting with extraction from sand followed by extraction from a soil with a high organic content. The three-factor factorial design used for this purpose included the three factors: temperature, water content, and exposure time. The results demonstrated high extraction efficiency achieved when sampling from sand and lower extraction efficiency when sampling from the soil with a high organic content. The recovery was enhanced to a large extent in the latter case at a higher temperature with very low detection limits. The results presented in this thesis indicate that the WMS can be a potential universal tool for sampling from all environmental matrices in vapor intrusion investigations.