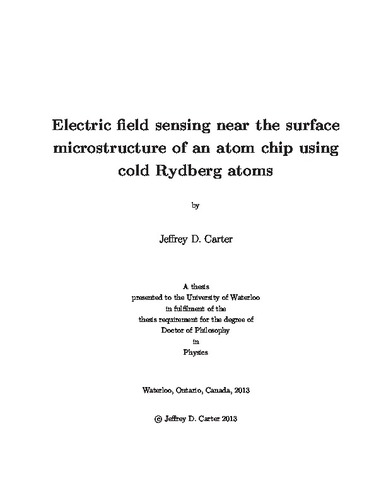 This thesis reports experimental observations of electric fields using Rydberg atoms, including dc field measurements near the surface of an atom chip, and demonstration of measurement techniques for ac fields far from the surface. Associated theoretical results are also presented, including Monte Carlo simulations of the decoherence of Rydberg states in electric field noise as well as an analytical calculation of the statistics of dc electric field inhomogeneity near polycrystalline metal surfaces. DC electric fields were measured near the heterogeneous metal and dielectric surface of an atom chip using optical spectroscopy on cold atoms released from the trapping potential. The fields were attributed to charges accumulating in the dielectric gaps between the wires on the chip surface. The field magnitude and direction depend on the details of the dc biasing of the chip wires, suggesting that fields may be minimized with appropriate biasing. Techniques to measure ac electric fields were demonstrated far from the chip surface, using the decay of a coherent superposition of two Rydberg states of cold atoms. We have used the decay of coherent Rabi oscillations to place some bounds on the magnitude and frequency dependence of ac field noise. The rate of decoherence of a superposition of two Rydberg states was calculated with Monte Carlo simulations. The states were assumed to have quadratic Stark shifts and the power spectrum of the electric field noise was assumed to have a power-law dependence of the form 1/f^κ. The decay is exponential at long times for both free evolution of the superposition and and Hahn spin-echo sequences with a π refocusing pulse applied to eliminate the effects of low-frequency field noise. This decay time may be used to calculate the magnitude of the field noise if κ is known. The dc field inhomogeneity near polycrystalline metal surfaces due to patch potentials on the surface has been calculated, and the rms field scales with distance to the surface as 1/z^2. For typical evaporated metal surfaces the magnitude of the rms field is comparable to the image field of an elementary charge near the surface.