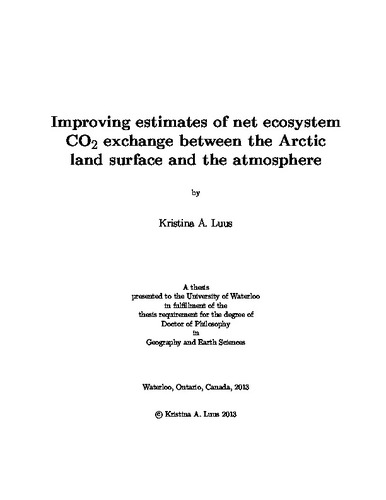 Feedbacks between the climate system and the high-latitude carbon cycle will substantially influence the intensity of future climate change. It is therefore crucial that the net ecosystem exchange of CO2 (NEE) between the high-latitude land surface and the atmosphere is accurately quantified, where NEE refers to the difference between ecosystem respiration (R) and photosynthesis (gross ecosystem exchange, GEE): NEE=-GEE+R in umol/m^2/s. NEE can only be directly measured over areas of 1 km^2 through eddy covariance, and modeling approaches such as the Vegetation Photosynthesis Respiration Model (VPRM) are required to upscale NEE. VPRM is a remote sensing based model that calculates R as a linear function of air temperature (Ta) when air temperature is above a given threshold (Tlow), and sets respiration to a constant value when Ta<Tlow. GEE is estimated according to remote sensing observations of vegetation indices, shortwave radiation, air temperature, and soil moisture. Although in situ findings have shown that snow and Arctic species composition have a substantial influence on high-latitude NEE, model estimates of high-latitude NEE have typically been generated without Arctic-specific vegetation classes, and without using remote sensing observations to represent the effects of snow on NEE. The hypothesis driving this work was therefore that uncertainty in estimates of high-latitude NEE could be reduced by representing the influences of Arctic vegetation classes and snow. The central objectives were to determine feasible approaches for reducing uncertainty in VPRM estimates of NEE by representing the influences of snow and Arctic vegetation, create PolarVPRM accordingly, and analyze inter-annual variability in PolarVPRM estimates of high-latitude North American NEE (2001-2012). The associations between snow and NEE, and the potential to describe these influences on NEE using remote sensing observations, were examined using time lapse camera observations of snow cover area (SCA) and eddy covariance measurements of NEE from Daring Lake, Northwest Territories, Canada. Analyses indicated good agreement between SCA derived from camera, Landsat and Moderate Resolution Imaging Spectroradiometer (MODIS) observations. SCA was also found to influence the timing and magnitude of NEE. MODIS SCA was therefore incorporated into VPRM, and VPRM was calibrated using eddy covariance and meteorological observations collected in 2005 at Daring Lake. VPRM was run through years 2004-2007 over both Daring Lake and Ivotuk, Alaska, USA, using four model formulations, three of which represented the effects of SCA on respiration and/or photosynthesis, and another which did not use MODIS SCA. Comparisons against eddy covariance observations indicated that uncertainty was reduced in VPRM estimates of NEE when respiration was calculated as a linear function of soil temperature when SCA>50%, and as a linear function of air temperature when SCA<50%, thereby reflecting the influence of snow on decoupling soil/air temperatures. Representing the effect of SCA on NEE therefore reduced uncertainty in VPRM estimates of NEE. In order to represent spatial variability in high-latitude estimates of NEE due to vegetation type, Arctic-specific vegetation classes were created for PolarVPRM by combining and aggregating two existing vegetation classifications: the Synergetic Land Cover Product and the Circumpolar Arctic Vegetation Map. Levene's test indicated that the PolarVPRM vegetation classes divided the pan-Arctic region into heterogeneous distributions in terms of net primary productivity, and passive microwave derived estimates of snow and growing season influences on NEE. A non-parametric statistical approach of Alternating Conditional Expectations found significant, non-linear associations to exist between passive microwave derived estimates of snow and growing season drivers of NEE. Furthermore, the shape of these associations varied according to the vegetation class over which they were examined. Further support was therefore provided to the idea that uncertainty in model estimates of NEE could be reduced by calculating snow and growing season NEE separately within each vegetation class. PolarVPRM estimates of NEE in 2001-2012 were generated at a three hourly and 1/6 x 1/4 degree resolution across polar North America (55-170 W, 55-83 N). Model calibration was conducted over three sites: Daring Lake, Ivotuk, and Atqasuk, Alaska, USA. Model validation was then conducted by comparing PolarVPRM estimates of year-round daily average NEE to non-gap-filled eddy covariance observations of daily average NEE acquired over the three calibration sites, as well as six other Arctic sites. PolarVPRM performed well over all sites, with an average mean absolute error (MAE) of 0.20 umol/m^2/s, and had diminished error rates when the influence of SCA on respiration was explicitly represented. Error analysis indicated that peak growing season GEE was underestimated at Barrow because GEE at this site showed a stronger response to the amount of incoming shortwave radiation than at the calibration site, suggesting that PolarVPRM may underestimate GEE over wetland and barren vegetated regions. Despite these uncertainties, PolarVPRM was found to generate more accurate estimates of monthly and three-hourly NEE relative to eddy covariance observations than two established models, FLUXNET Model-Tree Ensemble (MTE) and CarbonTracker. Relative to eddy covariance observations and PolarVPRM estimates, MTE tended to overestimate snow season respiration, and CarbonTracker tended to overestimate the amount of midday photosynthesis. Analysis of PolarVPRM output across North America (north of 55 N) found an increase in net annual carbon efflux over over time (2001-2012). Specifically, increased rates of respiration are estimated when soil and air temperatures are warmer. Although increases in growing season vegetation indices and air temperature enable greater photosynthetic uptake by Arctic vegetation, forests and shrublands uptake less CO2 in the middle of the growing season when air temperatures rise above the physiological optima for photosynthesis. As a result, PolarVPRM estimated a decline in net photosynthetic uptake over time. Overall, PolarVPRM output indicates that North American regions north of 55 N are losing strength as a carbon sink in response to rising air temperatures.