‘Concerned not only with relief’: UNRRA’s work rehabilitating the Displaced Persons in the American zone of occupation in Germany, 1945-1947 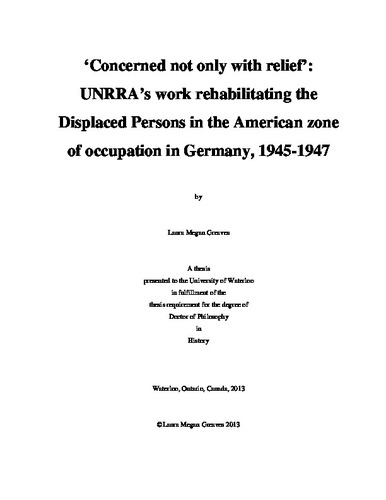 The purpose of the dissertation is to further our knowledge of the process of normalization in the displaced person (DP) camps in the American zone of occupation in Germany after the Second World War. The United Nations Relief and Rehabilitation Administration (UNRRA) welfare workers brought with them their years of education and training in the United States, primarily as professional social workers, to their work in these camps. They believed that their task was not only to feed and clothe the DPs, but to provide rehabilitation as well. They continually emphasized the importance of reinstituting prewar social norms as the key element in rehabilitating the DPs. However, once they entered the DP camps in Germany, they soon discovered that the DPs had very different understandings of what constituted “normal life.” As a result, rehabilitation included not only reinstituting prewar social norms, but also introducing the DPs to new ones. UNRRA focused their rehabilitation efforts on six aspects of DP care: housing, cleanliness, education, work, and respect for civil and criminal law. While the DP camps were administered by UNRRA, they existed next to German communities who governed by Military Government and in the midst of their own reconstruction efforts. Given the immense wartime destruction, widespread shortages and the arrival of large numbers of German refugees, resources for all groups were at a premium. As a result, there were numerous opportunities for creative and broad-minded people to work at solving problems in unconventional ways. While UNRRA planning had provided some direction for its welfare workers, staff working in field came to play an important role in defining UNRRA’s policies. At the same time, their competing goals of rehabilitation and repatriation, as well as their at-times difficult relationship with the military, worked to constrain their efforts. Nevertheless, when UNRRA’s tenure as administrator of the DP camps ended in the summer of 1947, they left behind a legacy which highlighted the importance of the successful integration of refugees into their societies, and which made rehabilitation as central as relief in all future humanitarian responses.