Identification of genes regulated by the Drosophila transcription factor Hindsight 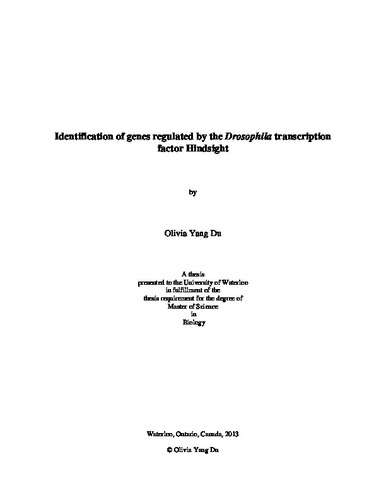 Hindsight (HNT) is a zinc finger transcription factor that is required for morphogenesis of the Drosophila embryo, having roles in germ band retraction (GBR) as well as dorsal closure (DC). HNT expression is also found in sensory organ precursors (SOP) of the developing pupal peripheral nervous system, and muscle progenitor cells, but the role of HNT in neurogenesis and myogenesis during embryogenesis has not been investigated in any depth. Microarray analysis of embryos over-expressing HNT during GBR and DC identified 1290 genes with significant changes in expression. This data set included many potential HNT targets, including genes associated with myogensis, and a disruption of muscle development was observed in embryos over-expressing HNT. It is possible that HNT may function to repress muscle identity genes in muscle founder cells. In addition, HNT over expressing embryos were found to resemble the neurogenic class of mutants. Among the potential target genes, D-Pax2 (shaven, sparkling, CG11049) expression, which is known to be expressed in the developing peripheral nervous system, was confirmed to be up-regulated following HNT over-expression. Interestingly, D-Pax2 and HNT expression were found to co-localize at the onset of their expression at stages 10-12 in embryos, but were not co-localized in later stages of embryogenesis. The up-regulation of D-Pax2 by HNT over-expression was further characterized and was found to be associated with strong ectopic HNT expression. The relevance of HNT to the regulation of D-Pax2 during normal development remains to be determined, but it is possible that endogenous expression of HNT is involved in D-Pax2 repression.