Planning Public Transport Improvements in Mexico: Analysis of the Influence of Private Bus Operators in the Planning Process 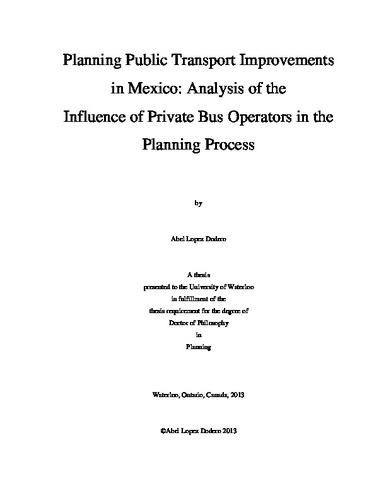 In Mexico, transportation planning deals with unique social, political, financial and cultural elements when promoting mobility solutions. These elements include the opportunity costs of public investments, institutional barriers and changes in the political agenda. Other important element is the influence of existing private bus operator. Bus provision is offered by a disproportionate number of small private enterprises, single concessionaries and unregulated providers. Today, many of these entities have gained political power and, often, resist attempts to improve public transportation. The recommended solution to overcome political problem created from the opposition from private providers includes the introduction of franchise systems. Franchising systems under strict institutional regulations support the incorporation of current private providers in the proposed projects. However, incorporating bus operators into any form of system under franchise system implies major changes in private providers’ business and routines. Franchising implies moving from concession-owner-driver to simple employee or shareholder of the new system. Franchising also results in having to change routines associated with the operation. Understandably, these changes generate resistance, delaying implementations. In this thesis it is argued that a framework from which the influence of these private providers on transport improvements may be evaluated is critically important. This framework can contribute to knowledge about the political feasibility of projects. Private bus operators can exert an influence on system technology and on the selection of areas for improvements. Based on qualitative and quantitative methods, this thesis frames, analyzes, formalizes and quantifies the impact of private bus operators in government attempts to improve transit provision. A fieldwork methodology was employed to identify the factors that influence private bus operators’ reactions to transit improvements. Using a logistic regression, these factors are statistically evaluated. Results show that several variables in which the government exert a direct influence (that related with trust, the legal recognition to operate and taxation) on private bus operators’ willingness to participate in transit improvements. Other important variables include those associated with the (i) characteristics of private bus operators; (ii) the nature of the business activity; and (iii) private bus operators’ perceptions about business having created for extensive period of time. Rationalizing the influence of private bus operators’ influence on the planning process of transit improvements contributes to maximizing the political feasibility of completion.