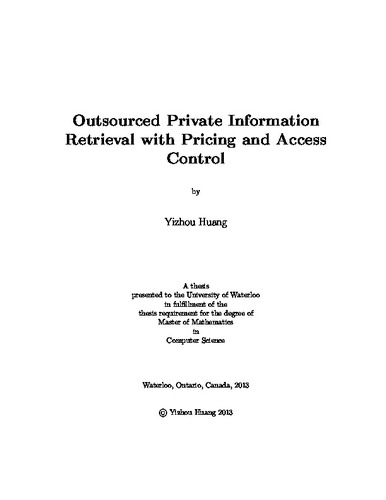 We propose a scheme for outsourcing Private Information Retrieval (PIR) to untrusted servers while protecting the privacy of the database owner as well as that of the database clients. We observe that by layering PIR on top of an Oblivious RAM (ORAM) data layout, we provide the ability for the database owner to perform private writes, while database clients can perform private reads from the database even while the owner is offline. We can also enforce pricing and access control on a per-record basis for these reads. This extends the usual ORAM model by allowing multiple database readers without requiring trusted hardware; indeed, almost all of the computation in our scheme during reads is performed by untrusted cloud servers. Built on top of a simple ORAM protocol, we implement a real system as a proof of concept. Our system privately updates a 1 MB record in a 16 GB database with an average end-to-end overhead of 1.22 seconds and answers a PIR query within 3.5 seconds over a 2 GB database. We make an observation that the database owner can always conduct a private read as an ordinary database client, and the private write protocol does not have to provide a "read" functionality as a standard ORAM protocol does. Based on this observation, we propose a second construction with the same privacy guarantee, but much faster. We also implement a real system for this construction, which privately writes a 1 MB record in a 1 TB database with an amortized end-to-end response time of 313 ms. Our first construction demonstrates the fact that a standard ORAM protocol can be used for outsourcing PIR computations in a privacy-friendly manner, while our second construction shows that an ad-hoc modification of the standard ORAM protocol is possible for our purpose and allows more efficient record updates.