An Evaluation of Trend and Anomalies of Arctic Sea Ice Concentration, 1979-2006 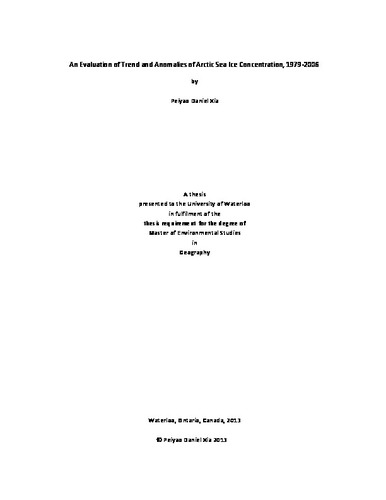 As a part of the Cyrosphere ecosystem, Arctic sea ice is one of the focal points when studying Arctic climate change. Arctic sea ice image has been documented by remotely sensed data since the 1970s. By examining these data, some climate patterns can be revealed. In this research, Arctic region is divided into 9 sections to analyze the regional differences of the ice coverage and variability. Data used are bootstrapped 1979 to 2006 SSM/I and SMMR images from NSIDC to perform a time series analysis to examine the sea ice trends and spatial/temporal anomalies detection by conducting a descending sort of sea ice coverage by years in the sub-regional scale. Then, the temporal mixture analysis developed by Piwowar & LeDrew is applied to the data to reveal the variability within each subregion. Fractional images produced by TMA highlight the temporal signature concentration in the entire Arctic region. And the color-mix image derived from TMA highlights and overlaps temporal signatures that have over 80% concentrations from highest to lowest. The color mix image can reveal the spatial distribution of similar temporal characteristics and the evolution of time series in the same area during the 30-year period. Through this analysis, the spatial and temporal variability of Arctic sea ice can be perceived that in the subpolar regions, Arctic sea ice has a higher seasonal pattern which varies a lot each other. The Arctic sea ice extent endures an overall decline trend, which the decline speed increases every ten years. But this trend is not statistically significant in every subregion. The spatial/temporal anomaly analysis reveals several patterns of Arctic sea ice variability. The seasonal variability of Arctic sea ice in the eastern and western side of the Arctic Basin resemble each other in the long term, which may coincide with the North Atlantic Oscillation. In addition, within a subregion, different areas may have significantly different temporal characteristics, such as the Greenland Sea and Seas of Okhotsk. Moreover, the temporal characteristics some areas in the Arctic region have changed through time significantly regarding early melt or late freeze. Hopefully this analysis will provide undiscovered temporal evolution through time and some new insights on the dynamics of the Arctic sea ice cover.