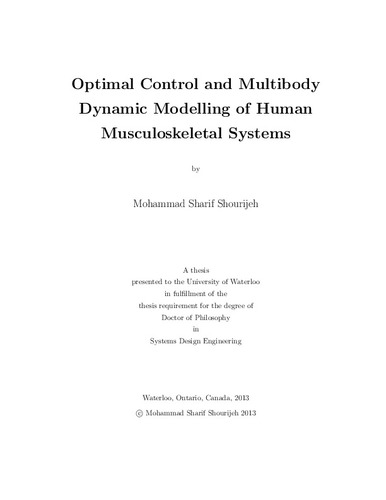 Musculoskeletal dynamics is a branch of biomechanics that takes advantage of interdisciplinary models to describe the relation between muscle actuators and the corresponding motions of the human body. Muscle forces play a principal role in musculoskeletal dynamics. Unfortunately, these forces cannot be measured non-invasively. Measuring surface EMGs as a non-invasive technique is recognized as a surrogate to invasive muscle force measurement; however, these signals do not reflect the muscle forces accurately. Instead of measurement, mathematical modelling of the musculoskeletal dynamics is a well established tool to simulate, predict and analyse human movements. Computer simulations have been used to estimate a variety of variables that are difficult or impossible to measure directly, such as joint reaction forces, muscle forces, metabolic energy consumption, and muscle recruitment patterns. Musculoskeletal dynamic simulations can be divided into two branches: inverse and forward dynamics. Inverse dynamics is the approach in which net joint moments and/or muscle forces are calculated given the measured or specified kinematics. It is the most popular simulation technique used to study human musculoskeletal dynamics. The major disadvantage of inverse dynamics is that it is not predictive and can rarely be used in the cause-effect interpretations. In contrast with inverse dynamics, forward dynamics can be used to determine the human body movement when it is driven by known muscle forces. The musculoskeletal system (MSS) is dynamically under-determinate, i.e., the number of muscles is more than the degrees of freedom (dof) of the system. This redundancy will lead to infinite solutions of muscle force sets, which implies that there are infinite ways of recruiting different muscles for a specific motion. Therefore, there needs to be an extra criterion in order to resolve this issue. Optimization has been widely used for solving the redundancy of the force-sharing problem. Optimization is considered as the missing consideration in the dynamics of the MSS such that, once appended to the under-determinate problem, \human-like" movements will be acquired. \Human-like" implies that the human body tends to minimize a criterion during a movement, e.g., muscle fatigue or metabolic energy. It is commonly accepted that using those criteria, within the optimization necessary in the forward dynamic simulations, leads to a reasonable representation of real human motions. In this thesis, optimal control and forward dynamic simulation of human musculoskeletal systems are targeted. Forward dynamics requires integration of the differential equations of motion of the system, which takes a considerable time, especially within an optimization framework. Therefore, computationally efficient models are required. Musculoskeletal models in this thesis are implemented in the symbolic multibody package MapleSim that uses Maple as the leverage. MapleSim generates the equations of motion governing a multibody system automatically using linear graph theory. These equations will be simplified and highly optimized for further simulations taking advantage of symbolic techniques in Maple. The output codes are the best form for the equations to be applied in optimization-based simulation fields, such as the research area of this thesis. The specific objectives of this thesis were to develop frameworks for such predictive simulations and validate the estimations. Simulating human gait motion is set as the end goal of this research. To successfully achieve that, several intermediate steps are taken prior to gait modelling. One big step was to choose an efficient strategy to solve the optimal control and muscle redundancy problems. The optimal control techniques are benchmarked on simpler models, such as forearm flexion/extension, to study the efficacy of the proposed approaches more easily. Another major step to modelling gait is to create a high-fidelity foot-ground contact model. The foot contact model in this thesis is based on a nonlinear volumetric approach, which is able to generate the experimental ground reaction forces more effectively than the previously used models. Although the proposed models and approaches showed strong potential and capability, there is still room for improvement in both modelling and validation aspects. These cutting-edge future works can be followed by any researcher working in the optimal control and forward dynamic modelling of human musculoskeletal systems.