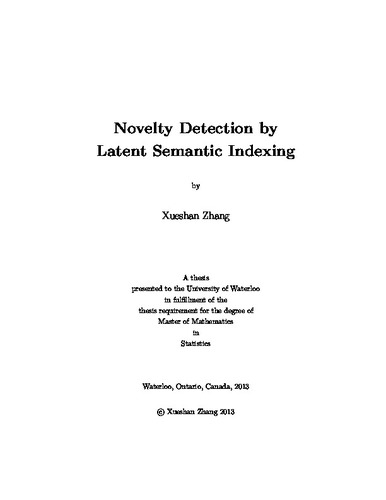 As a new topic in text mining, novelty detection is a natural extension of information retrieval systems, or search engines. Aiming at refining raw search results by filtering out old news and saving only the novel messages, it saves modern people from the nightmare of information overload. One of the difficulties in novelty detection is the inherent ambiguity of language, which is the carrier of information. Among the sources of ambiguity, synonymy proves to be a notable factor. To address this issue, previous studies mainly employed WordNet, a lexical database which can be perceived as a thesaurus. Rather than borrowing a dictionary, we proposed a statistical approach employing Latent Semantic Indexing (LSI) to learn semantic relationship automatically with the help of language resources. To apply LSI which involves matrix factorization, an immediate problem is that the dataset in novelty detection is dynamic and changing constantly. As an imitation of real-world scenario, texts are ranked in chronological order and examined one by one. Each text is only compared with those having appeared earlier, while later ones remain unknown. As a result, the data matrix starts as a one-row vector representing the first report, and has a new row added at the bottom every time we read a new document. Such a changing dataset makes it hard to employ matrix methods directly. Although LSI has long been acknowledged as an effective text mining method when considering semantic structure, it has never been used in novelty detection, nor have other statistical treatments. We tried to change this situation by introducing external text source to build the latent semantic space, onto which the incoming news vectors were projected. We used the Reuters-21578 dataset and the TREC data as sources of latent semantic information. Topics were divided into years and types in order to take the differences between them into account. Results showed that LSI, though very effective in traditional information retrieval tasks, had only a slight improvement to the performances for some data types. The extent of improvement depended on the similarity between news data and external information. A probing into the co-occurrence matrix attributed such a limited performance to the unique features of microblogs. Their short sentence lengths and restricted dictionary made it very hard to recover and exploit latent semantic information via traditional data structure.