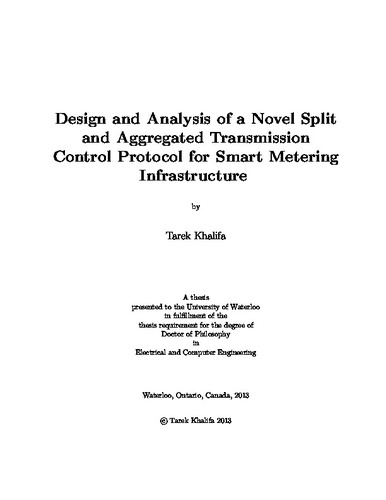 Utility companies (electricity, gas, and water suppliers), governments, and researchers recognize an urgent need to deploy communication-based systems to automate data collection from smart meters and sensors, known as Smart Metering Infrastructure (SMI) or Automatic Meter Reading (AMR). A smart metering system is envisaged to bring tremendous benefits to customers, utilities, and governments. The advantages include reducing peak demand for energy, supporting the time-of-use concept for billing, enabling customers to make informed decisions, and performing effective load management, to name a few. A key element in an SMI is communications between meters and utility servers. However, the mass deployment of metering devices in the grid calls for studying the scalability of communication protocols. SMI is characterized by the deployment of a large number of small Internet Protocol (IP) devices sending small packets at a low rate to a central server. Although the individual devices generate data at a low rate, the collective traffic produced is significant and is disruptive to network communication functionality. This research work focuses on the scalability of the transport layer functionalities. The TCP congestion control mechanism, in particular, would be ineffective for the traffic of smart meters because a large volume of data comes from a large number of individual sources. This situation makes the TCP congestion control mechanism unable to lower the transmission rate even when congestion occurs. The consequences are a high loss rate for metered data and degraded throughput for competing traffic in the smart metering network. To enhance the performance of TCP in a smart metering infrastructure (SMI), we introduce a novel TCP-based scheme, called Split- and Aggregated-TCP (SA-TCP). This scheme is based on the idea of upgrading intermediate devices in SMI (known in the industry as regional collectors) to offer the service of aggregating the TCP connections. An SA-TCP aggregator collects data packets from the smart meters of its region over separate TCP connections; then it reliably forwards the data over another TCP connection to the utility server. The proposed split and aggregated scheme provides a better response to traffic conditions and, most importantly, makes the TCP congestion control and flow control mechanisms effective. Supported by extensive ns-2 simulations, we show the effectiveness of the SA-TCP approach to mitigating the problems in terms of the throughput and packet loss rate performance metrics. A full mathematical model of SA-TCP is provided. The model is highly accurate and flexible in predicting the behaviour of the two stages, separately and combined, of the SA-TCP scheme in terms of throughput, packet loss rate and end-to-end delay. Considering the two stages of the scheme, the modelling approach uses Markovian models to represent smart meters in the first stage and SA-TCP aggregators in the second. Then, the approach studies the interaction of smart meters and SA-TCP aggregators with the network by means of standard queuing models. The ns-2 simulations validate the math model results. A comprehensive performance analysis of the SA-TCP scheme is performed. It studies the impact of varying various parameters on the scheme, including the impact of network link capacity, buffering capacity of those RCs that act as SA-TCP aggregators, propagation delay between the meters and the utility server, and finally, the number of SA-TCP aggregators. The performance results show that adjusting those parameters makes it possible to further enhance congestion control in SMI. Therefore, this thesis also formulates an optimization model to achieve better TCP performance and ensures satisfactory performance results, such as a minimal loss rate and acceptable end-to-end delay. The optimization model also considers minimizing the SA-TCP scheme deployment cost by balancing the number of SA-TCP aggregators and the link bandwidth, while still satisfying performance requirements.