The influence of redundant spatial regularities in statistical and sequence learning 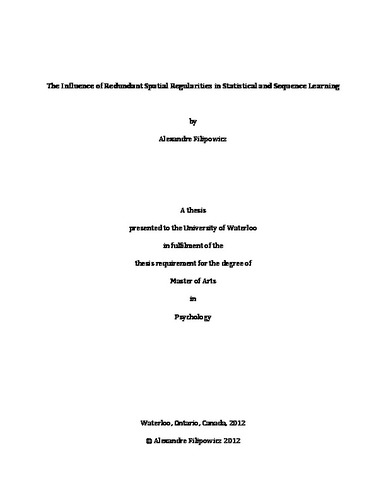 The following two studies examined the influence of spatial regularities on our ability to learn and predict frequencies and sequences of events. Research into statistical and sequence learning has demonstrated that we can learn the statistical properties of events and use this knowledge to make predictions about future events. Research has also demonstrated that redundant spatial features associated with events can influence our ability to respond to and discriminate between different stimuli. The goal of this thesis was to test whether redundant spatial features could influence our ability to notice non-spatial regularities in an environment. Using a computerized version of the children’s game ‘rock-paper-scissors’ (RPS), undergraduates were instructed to win as often as possible against a computer that played varying strategies. For each strategy, the computer’s plays were either presented with spatial regularity (i.e., ‘rock’ would always appear on the left of the screen, ‘paper’ in the middle, and ‘scissors’ on the right) or without spatial regularity (i.e., the items were equally likely to appear in any of the three screen locations). The results showed that, although irrelevant to the task itself, spatial regularities had a moderate influence when participants learned to exploit easy strategies, and a more pronounced influence when learning to exploit harder strategies. This research suggests that redundant spatial features can influence our ability to learn and represent distributions of events.