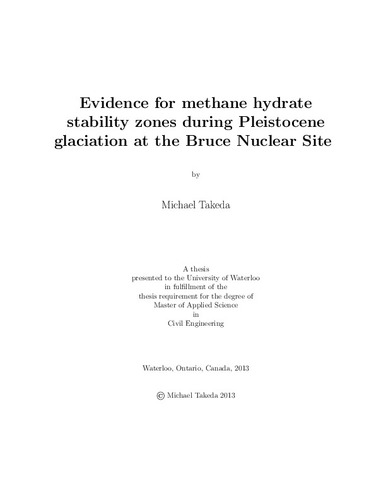 A gas hydrate refers to the state in which hydrogen-bonded water molecules form a rigid lattice structure of so-called "cages", wherein "guest" molecules of natural gas are entrapped. Not unlike ice, gas hydrates are prone to form at low temperatures and high pressures; however, their crystalline structure allows them to remain stable at temperatures and pressures under which the phase limits of ice would otherwise be exceeded. To date, a number of instances of gas hydrates forming in the subsurface of Arctic climates below layers of permafrost have been identified, however the challenge of identifying past occurrences of methane hydrates during episodes of global cooling and glacial advance remains relatively unmet. During these periods of glacial/permafrost cover, the presence of hydrates could have a significant impact on the groundwater flow system due to the significant reduction of the porosity and permeability of hydrate saturated sediments. The purpose of this study is to investigate whether there is evidence to suggest that methane hydrates could have formed in the sedimentary units of the Michigan Basin at the Bruce nuclear site near Kincardine, Ontario, particularly when subjected to the impacts of glacial ice sheet loading. This study aims to provide insight into whether the potential impact of gas hydrates should be considered in the design of the proposed deep-geologic repository (DGR) for low- and intermediate-level nuclear waste. This study presents a framework employing regional-scale numerical modelling to estimate the evolution of temperature, pressure and salinity profiles across the study area, combined with thermodynamic predictive modelling to identify potential paleo-methane hydrate stability zones in the subsurface at the Bruce nuclear site. This study represents the first step to ultimately assess the extent of paleo-methane hydrates and their impact on subsurface conditions at the site. Transient subsurface conditions at the Bruce nuclear site were modelled over a period of 120,000 years (120 ka), encompassing episodes of glacial advance and retreat during the Pleistocene epoch. The spatial and transient outputs from numerical modelling of the study area were then used as inputs to thermodynamic predictive modelling of methane hydrate stability. The results of this study show that, based upon the subsurface temperature, pressure and salinity histories determined using a three-dimensional regional-scale numerical modelling approach, paleo-conditions at the Bruce nuclear site become conducive with methane hydrate stability during the study period. Two separate episodes of methane hydrate stability were identified - lasting from 62.5 to 56 thousand years before present (kaBP) and from 23 to 13.5 kaBP, respectively - which were found to correspond to periods of glacial advance across the study area. The vertical extent of the estimated hydrate stability zones varied across the site, however it generally followed the limits of the Upper Silurian units, penetrating to deeper elevations towards the south west end of the study area.