Probabilistic Assessment of Common Cause Failures in Nuclear Power Plants 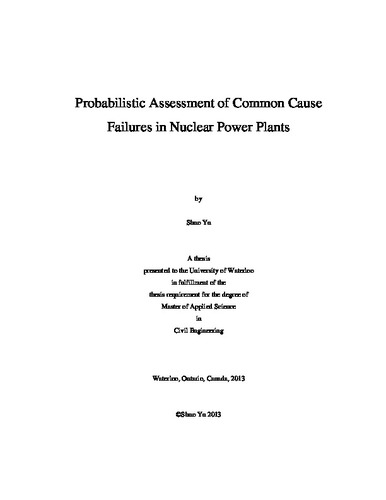 Common cause failures (CCF) are a significant contributor to risk in complex technological systems, such as nuclear power plants. Many probabilistic parametric models have been developed to quantify the systems subject to the CCF. Existing models include the beta factor model, the multiple Greek letter model, the basic parameter model, the alpha factor model and the binomial failure rate model. These models are often only capable of providing a point estimate, when there are limited CCF data available. Some recent studies have proposed a Bayesian approach to quantify the uncertainties in CCF modeling, but they are limited in addressing the uncertainty in the common failure factors only. This thesis presents a multivariate Poisson model for CCF modeling, which combines the modeling of individual and common cause failures into one process. The key idea of the approach is that failures in a common cause component group of n components are decomposed into superposition of k (>n) independent Poisson processes. Empirical Bayes method is utilized for simultaneously estimating the independent and common cause failure rates which are mutually exclusive. In addition, the conventional CCF parameters can be evaluated using the outcomes of the new approach. Moreover, the uncertainties in the CCF modeling can also be addressed in an integrated manner. The failure rate is estimated as the mean value of the posterior density function while the variance of the posterior represents the variation of the estimate. A MATLAB program of the Monte Carlo simulation was developed to check the behavior of the proposed multivariate Poisson (MVP) model. Superiority over the traditional CCF models has been illustrated. Furthermore, due to the rarity of the CCF data observed at one nuclear power plant, data of the target plant alone are insufficient to produce reliable estimates of the failure rates. Data mapping has been developed to make use of the data from source plants of different sizes. In this thesis, data mapping is combined with EB approach to partially assimilate information from source plants and also respect the data of the target plant. Two case studies are presented using different database. The results are compared to the empirical values provided by the United States Nuclear Regulatory Commission (USNRC).