Capital Brownfields: An Assessment of Brownfield Planning Policy in the City of Ottawa, Ontario 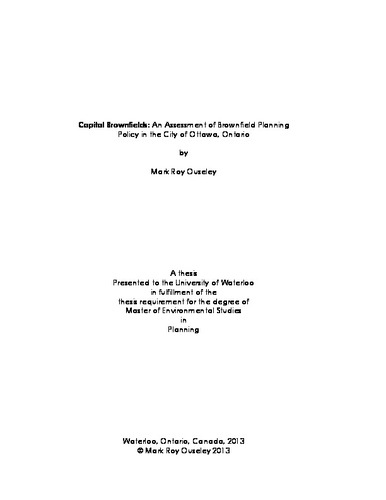 A brownfield is previously developed land which suffers from actual or perceived contamination due to past uses. The City of Ottawa, like many of Canada's municipalities, is faced with a significant inventory of brownfields. As the legacy of industrial activities in earlier times, these sites have become an environmental threat, blight to the community and economic loss for their owners and the City. Unlike many of Ontario's more highly industrialized municipalities, Ottawa has a less industrialized history and, as the Nation's Capital, faces unique brownfield challenges and development climate, requiring a policy approach that is tailored to the Ottawa development market. Ottawa's major brownfield sites are owned by different levels of governments and private firms, ranging from the National Capital Commission owned LeBreton Flats to the City of Ottawa owned Bayview Yards. This thesis intends to examine current development trends for brownfields, impediments and opportunities for development, assess the efficacy of current policies and provide suggestions for the improvement of the existing brownfield development planning process in Ottawa, using an applied research method. This study is developed through interviews with key informants, a collective case study analysis, a literature review and site visits. This thesis intends to study current policy and provide recommendations to improve Ottawa's approach to brownfield development. The City of Ottawa has developed a Brownfield Community Improvement Plan, featuring multiple grant programs which has proved to be successful in incentivizing the development of brownfield sites which otherwise would have remained idle. However, the creation and development of this policy was a challenging process, requiring review and improvement in light of ongoing development applications. The findings of this paper indicate the policy has been successful due to its encouragement of brownfield projects which otherwise would not have occurred. In addition, case studies of Bayview Yards, CLC Rockcliffe Lands, Lansdowne Park, LeBreton Flats, 1357 Baseline Road and 300 West Hunt Club Road illustrate the pursuit of significant brownfield development projects in the City. However, despite its success, some challenges still exist which the City of Ottawa must endeavour to overcome. By tackling these challenges, the City could further aid in erasing brownfields from Ottawa's urban fabric and leave a legacy to its residents, characterized by a robust urban centre free from severe environmental contamination.