The Black-Scholes and Heston Models for Option Pricing 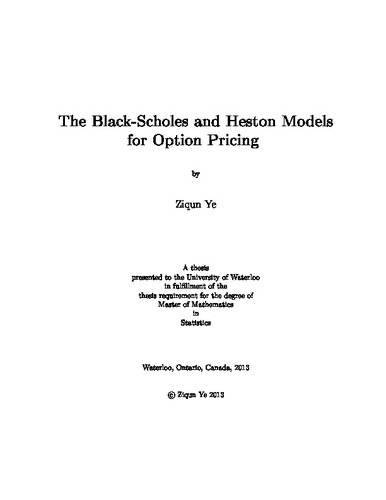 Stochastic volatility models on option pricing have received much study following the discovery of the non-at implied surface following the crash of the stock markets in 1987. The most widely used stochastic volatility model is introduced by Heston (1993) because of its ability to generate volatility satisfying the market observations, being non-negative and mean-reverting, and also providing a closed-form solution for the European options. However, little research has been done on Heston model used to price early-exercise options. This presumably is largely due to the absence of a closed-form solution and the increase in computational requirement that complicates the required calibration exercise. This thesis examines the performance of the Heston model versus the Black-Scholes model for the American Style equity option of Microsoft and the index option of S&P 100 index. We employ a finite difference method combined with a Projected Successive Over-relaxation method for pricing an American put option under the Black-Scholes model, while an Alternating Direction Implicit method is utilized to decompose a multi-dimensional partial differential equation into several one dimensional steps under the Heston model. For the calibration of the Heston model, we apply a two step procedure where in the first step we apply an indirect inference method to historical stock prices to estimate diffusion parameters under a probability measure and then use a least squares method to estimate the instantaneous volatility and the market risk premium which are used to switch from working under the probability measure to working under the risk-neutral measure. We find that option price is positively related with the value of the mean reverting speed and the long-term variance. It is not sensitive to the market price of risk and it is negatively related with the risk free rate and the volatility of volatility. By comparing the European put option and the American put option under the Heston model, we observe that their implied volatility generally follow similar patterns. However, there are still some interesting observations that can be made from the comparison of the two put options. First, for the out-of-the-money category, the American and European options have rather comparable implied volatilities with the American options' implied volatility being slightly bigger than the European options. While for the in-the-money category, the implied volatility of the European options is notably higher than the American options and its value exceeds the implied volatility of the American options. We also assess the performance of the Heston model by comparing its result with the result from the Black-Scholes model. We observe that overall the Heston model performs better than the Black-Scholes model. In particular, the Heston model has tendency of underpricing the in-the-money option and overpricing the out-of-the-money option. Whereas, the Black-Scholes model is inclined to underprice both the in-the-money option and the out-of-the-money option.b