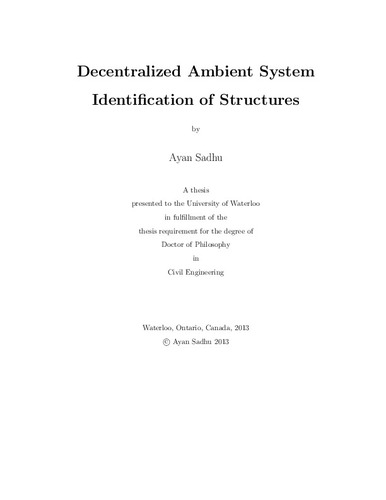 Many of the existing ambient modal identification methods based on vibration data process information centrally to calculate the modal properties. Such methods demand relatively large memory and processing capabilities to interrogate the data. With the recent advances in wireless sensor technology, it is now possible to process information on the sensor itself. The decentralized information so obtained from individual sensors can be combined to estimate the global modal information of the structure. The main objective of this thesis is to present a new class of decentralized algorithms that can address the limitations stated above. The completed work in this regard involves casting the identification problem within the framework of underdetermined blind source separation (BSS). Time-frequency transformations of measurements are carried out, resulting in a sparse representation of the signals. Stationary wavelet packet transform (SWPT) is used as the primary means to obtain a sparse representation in the time-frequency domain. Several partial setups are used to obtain the partial modal information, which are then combined to obtain the global structural mode information. Most BSS methods in the context of modal identification assume that the excitation is white and do not contain narrow band excitation frequencies. However, this assumption is not satisfied in many situations (e.g., pedestrian bridges) when the excitation is a superposition of narrow-band harmonic(s) and broad-band disturbance. Under such conditions, traditional BSS methods yield sources (modes) without any indication as to whether the identified source(s) is a system or an excitation harmonic. In this research, a novel under-determined BSS algorithm is developed involving statistical characterization of the sources which are used to delineate the sources corresponding to external disturbances versus intrinsic modes of the system. Moreover, the issue of computational burden involving an over-complete dictionary of sparse bases is alleviated through a new underdetermined BSS method based on a tensor algebra tool called PARAllel FACtor (PARAFAC) decomposition. At the core of this method, the wavelet packet decomposition coefficients are used to form a covariance tensor, followed by PARAFAC tensor decomposition to separate the modal responses. Finally, the proposed methods are validated using measurements obtained from both wired and wireless sensors on laboratory scale and full scale buildings and bridges.