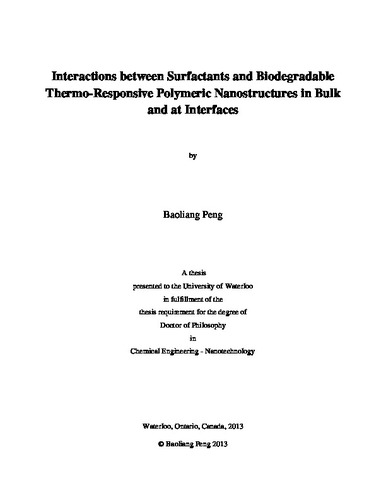 Interactions between surfactants and polymeric nanostructures have gained increasing attention due to their potential application in many disciplines. In this study, a well-defined random copolymer containing 2-(2-methoxyethoxy) ethyl methacrylate (MEO2MA) and poly(ethylene glycol) methyl ether methacrylate (PEGMA2080) (poly(MEO2MA-co-PEGMA2080)) was synthesized using the atom transfer radical polymerization (ATRP) process, and its thermo-responsive behaviors in aqueous solution were investigated. In comparison to other thermo-sensitive random copolymers based on oligo(ethylene glycol) methacrylates (OEGMA), this copolymer exhibited an unusual thermal induced two-stage aggregation process. The copolymer chains associated at the first thermal transition followed by a rearrangement process at the second thermal transition to produce a stable core-shell micellar structure. Furthermore, the binding interactions between cationic surfactants and this copolymer were examined below and above its cloud point. In general, the binding interactions between cationic surfactants and neutral polymers are weak and cationic surfactants are very selective and only bind to those polymers with specific hydrophobic groups. Significant hydrophobic interactions were observed between surfactant monomers and the polymer backbone. The binding occurred uncooperatively at low surfactant concentration, which was confirmed by electromotive force (EMF) measurements. Moreover, the binding affinity of three cationic surfactants follows the sequence: CTAB > TTAB > DoTAB. Cellulose Nanocrystals (CNC) with diameter of 10-20 nm and length of 200-400 nm, derived from native cellulose, is a promising new class of nanomaterials due to its high specific strength, high surface area, and unique optical properties. Currently, most of researches focused on the improvement of its steric stability, dispersability and compatibility in different solvents or matrices. A thermo-responsive polymer, namely Jeffamine M600 (a 600 Da polypropylene glycol) was grafted on the surface of cellulose nanocrystals (CNC) via a peptide coupling reaction. The better dispersion of the modified CNC in water was demonstrated, and the interactions between surfactants and M600-grafted CNC were investigated via isothermal titration calorimetry (ITC). Three types of surfactants with dodecyl alkyl chain and different head groups, namely cationic dodecyltrimethylammonium bromine (DoTAB), anionic sodium dodecyl sulfate (SDS), and nonionic poly(ethylene glycol) dodecyl ether (Brij 30) were studied. Physical mechanisms describing the interactions of cationic, anionic and nonionic surfactants and M600-grafted CNC were proposed. Chitosan molecules are water-soluble in acidic media due to the protonation of amino groups. However, some applications of chitosan are restricted by its poor solubility in basic media. A biocompatible derivative of chitosan, N-carboxyethylchitosan (CECh) was synthesized by Michael addition reactions, which possessed high solubility in both acidic and basic media due to the modification by carboxyl groups. The aggregation behavior of CECh in aqueous solution under the effects of pH, polymer concentration, as well as a gemini surfactant, was investigated by turbidity, zeta potential, fluorescence spectroscopy, viscosity, and surface tension measurements. This research demonstrates that nanostructures comprising of thermo-responsive copolymers can be controlled and manipulated by temperature and surfactants, and they play an important role in the physical properties of surfactants-polymeric complexes. The results from this research provide the fundamental knowledge on the self-assembly behavior and the binding mechanism of various novel polymeric systems and surfactants, which can be utilized to design and develop systems for personal care formulations and drug delivery systems.