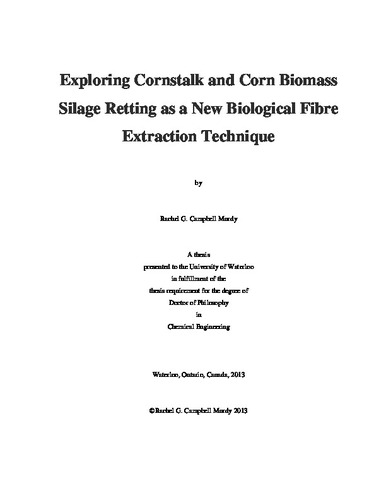 Presently there are two forms of biological fibre extraction, water retting or dew retting, which use bacteria or fungi, respectively. Microbial action results in release of the cellulose fibres due to modification of the pectin, hemicellulose and lignin content from parenchyma cells and the middle lamellae. Water retting results in pollution, high costs associated with labour and drying, as well as significant waste water production, while disadvantages to dew retting include the need for appropriate climates, variable and inferior fibre quality, risks of over-retting as well as health effects due to dust and fungal contaminants. The overall objective of this research was to explore silage retting as a new pre-processing technique allowing use of available farm infrastructure and contained retting conditions to produce plant-derived fibres with improved physical and chemical characteristics suitable for application in biocomposites. The corn processing ability of the hemp retting agents Clostridium felsineum and Bacillus subtilis was also investigated. Pleiotropic and/or crop management practices were assessed by comparing the physico-mechanical properties and the microbial populations during silage fermentation of genetically equivalent conventional, Roundup Ready® (RR) and Bt-Roundup Ready® (Bt-RR) corn isolines. Potential recovery of volatile organic acids in silage retting effluent as value-added chemicals was also explored. The results indicated that C. felsineum is an effective corn retting agent given the effective release of the fibre bundles from the corn pith, with B. subtilis contributing to the retting process by reducing the oxygen content and providing the required anaerobic conditions for clostridial growth. The native microflora present in the plant phyllosphere also showed some retting ability. Composition, thermostability and mechanical properties of the biocomposites produced using the fibres from the retted corn were all found to vary depending on the variety of corn. Specifically, retted Bt-RR cornstalk showed a 15°C increase in onset of degradation. Divergences between corn silage microbial communities analyzed by community-level physiological and enzyme activity profiling indicated that metabolic shifts were time-, region-, and contaminant-sensitive. Acetic and butyric acid production in silage retting effluent was found to be highest under anaerobic conditions and was also influenced by corn hybrid variety, although a specific variety was not identified as most or least favourable for organic acid production due to high variability. Bt-RR cornstalk material was found to have higher cellulose content and better thermostability with an onset of degradation of up to 45°C higher than its genetic RR and conventional counterparts. However, fibres from the RR corn isoline produced biocomposites with the highest flexural strength and modulus. RR cornstalk-reinforced polypropylene showed a 37 and 94% increase in flexural strength and modulus, respectively when compared to the mechanical properties of the pure polypropylene. The Bt-RR and conventional varieties produced biocomposites with an average increase of 26.5% in flexural strength and 83.5% in flexural modulus. The thermostability of ensiled corn biomass was found to be influenced by region, use of inoculants and silage treatment, while the silage treatment accounted for most of the variability in corn biomass composition. Polypropylene matrix biocomposites produced with (30 wt%) pre- and post-silage corn did not show significant differences in mechanical properties. However, ensiled corn resulted in an increase in fibres and potential microbial biomass of smaller particle sizes with more optimal thermostability and purity, producing biocomposites with higher flexural strength and modulus especially at higher extrusion temperatures. Cornstalk is an effective reinforcement material, producing biocomposites with higher flexural strength, flexural modulus and impact strength. Whole corn biomass presents a potential alternative to other plant fibres, especially as filler material. Silage retting resulted in fibres with a higher thermostability and smaller particle size distribution that, given their already smaller aspect ratio, could result in better mechanical properties in thermoplastics with a higher melting temperature or biocomposites requiring higher shear for mixing.