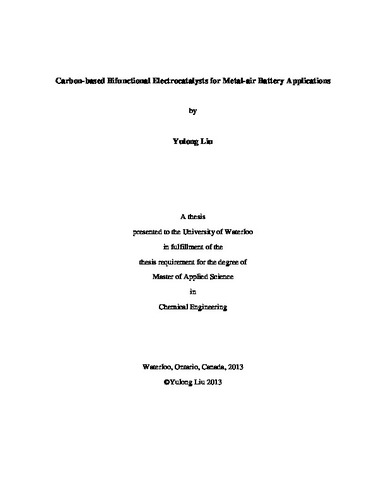 The ever-increasing energy consumption and the environmental issues from the excessive rely on fossil fuels have triggered intensive research on the next generation power sources. Metal-air batteries, as one of the most promising technologies emerged, have attracted enormous attention due to its low cost, environmental benignity and high energy density. Among all types of metal-air batteries, Zn-air batteries in particular have tremendous potential for use as alternative energy storage primarily by the low-cost, abundance, low equilibrium potential, environmental benignity, a flat discharge voltage and a longer shell life. However, there are still issues in pertinent to the anode, electrolyte and cathode that remain to be overcome. In particular, the electrocatalyst at the cathode of a metal-air battery which catalyzes the electrochemistry reactions during charge and discharge of the cell plays the most crucial role for the successful commercialization of the metal-air technology. A series of studies from the carbon nanofibres to spinel cobalt oxide and perovskite lanthanum nickelate was conducted to explore the ORR/OER catalytic properties of those materials which lead to further investigations of the non-precious metal oxide/carbon hybrids as bifunctional catalysts. Introducing ORR active species such as nitrogen, sulfur, boron and phosphorus into high surface area carbon has been an effective strategy to fabricate high catalytic activity ORR electrocatalyst. Carbon nanofibre is an abundant, low cost and conductive material that has tremendous potential as ORR catalyst, especially via KOH activation and nitrogen-doping post-treatments. These two post-treatment methods serve as simplistic methodologies to enhance the carbon surface area and ORR catalytic activity of the pristine carbon nanofibres, respectively. The activated and nitrogen-doped carbon nanofibres demonstrated 26% of improved half-wave potential and 17% of increased limiting current density as a comparison to the pristine carbon nanofibre via RDE testing in alkaline electrolyte. To realize the catalytic activity of activated and nitrogen-doped carbon nanofibres in a more practical condition, they are further evaluated in Zn-air batteries. Polarization curves retrieved from Zn-air cell testing showed 75% higher voltage obtained by activated and nitrogen-doped carbon nanofibres than pristine carbon nanofibres at 70mAcm-2 current density. Structured oxides such as spinels and perovskites have been widely reported as ORR and OER catalyst in metal-air batteries. It is widely known that the properties of nanostructures are closely pertinent to their morphologies. The initial performance and durability of cubic Co3O4 synthesized from Feng et al and LaNiO3 from modified sol-gel method are tested in RDE system. After the durability testing, the ORR onset potential and limiting current density of cubic Co3O4 has decreased by 50% and 25%, respectively, whereas the OER limiting current density dropped significantly from ~15mAcm2 to almost zero current density. LaNiO3 with different particle sizes synthesized from modified sol-gel method was prepared and evaluated in RDE system. A particle size related performance can be clearly seen from the RDE results. The ORR limiting current of the lanthanum nickelate with smaller particle size (LNO-1) is higher than that of lanthanum nickelate with larger particle size (LNO-0) by 40% and the OER limiting current of LNO-1 is almost tripled that of LNO-0. With the previous experience on carbon material and structured oxides, two hybrid bifunctional catalysts were prepared and their performance was evaluated. cCo3O4/ExNG was made by physically mixing of cCo3O4 with ExNG with 1to 1 ratio. The hybrid showed enhanced bifunctional catalytic activities compared to each of its individual performance. Based on the voltammetry results, a significant positive shift (+0.16V) in ORR half-wave potential and tripled limiting current were observed in the case of the hybrid compared to the pure cobalt oxide. By combing cCo3O4 and ExNG, the OER limiting current of the hybrid exceeds that of cCo3O4 by ca. 33% and four-fold that of the ExNG. The kinetic current density at -0.4V for cCo3O4/ExNG is 15.9 mAcm-2 which is roughly 4 times the kinetic current density of the ExNG (3.8 mAcm-2) and over 10 times greater than that of cCo3O4 (1.1 mAcm-2). Electrochemical impedance spectroscopy showed that the charge transfer resistance of the hybrid is ca. one third of cCo3O4 and roughly only one half of ExNG which suggests a more efficient electrocatalysis of the hybrid on the air electrode than the other two. Mixing structured oxides with carbon material provides a simple method of fabricating bifunctional catalysts, however the interactions between those two materials are quite limited. In-situ synthesis of cCo3O4/MWCNT hybrid by chemically attaching cCo3O4to the acid-functionalized MWCNT is able to provide strong interactions between its components. Through RDE testing, the ORR activity of cCo3O4/MWCNT outperformed its individual component showing the highest onset potential (-0.15V) and current density (-2.91 mAcm-2 at -0.4V) with ~4 electron transfer pathway. Moreover, the MWCNT and cCo3O4 suffered from significant OER degradation after cycling (92% and 94%, respectively) whereas the hybrid material demonstrated an outstanding stability with only 15% of performance decrease, which is also far more superior to the physical mixture (30% higher current density). Among all the catalyst studied, cCo3O4/MWCNT has the highest performance and durability. The excellent performance of the hybrid warrants further in-depth research of non-precious metal oxide/carbon hybrids and the information presented in this thesis will create afoundation for future investigation towards high performance and durability bifunctional electrocatalysts for metal-air battery applications.