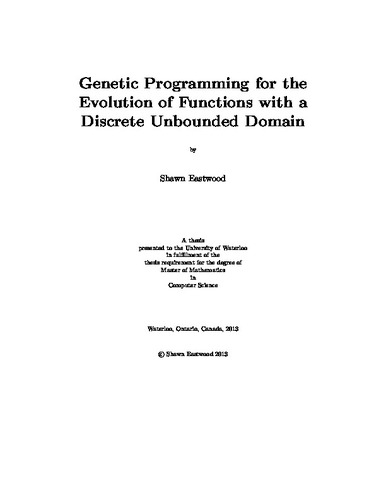 The idea of automatic programming using the genetic programming paradigm is a concept that has been explored in the work of Koza and several works since. Most problems attempted using genetic programming are finite in size, meaning that the problem involved evolving a function that operates over a finite domain, or evolving a routine that will only run for a finite amount of time. For problems with a finite domain, the internal representation of each individual is typically a finite automaton that is unable to store an unbounded amount of data. This thesis will address the problem of applying genetic programming to problems that have a ``discrete unbounded domain", meaning the problem involves evolving a function that operates over an unbounded domain with discrete quantities. For problems with an discrete unbounded domain, the range of possible behaviors achievable by the evolved functions increases with more versatile internal memory schemes for each of the individuals. The specific problem that I will address in this thesis is the problem of evolving a real-time deciding program for a fixed language of strings. I will discuss two paradigms that I will use to attempt this problem. Each of the paradigms will allow each individual to store an unbounded amount of data, using an internal memory scheme with at least the capabilities of a Turing tape. As each character of an input string is being processed in real time, the individual will be able to imitate a single step of a Turing machine. While the real-time restriction will certainly limit the languages for which a decider may be evolved, the fact that the evolved deciding programs run in real-time yields possible applications for these paradigms in the discovery of new algorithms. The first paradigm that I will explore will take a naive approach that will ultimately prove to be unsuccessful. The second paradigm that I will explore will take a more careful approach that will have a much greater success, and will provide insight into the design of genetic programming paradigms for problems over a discrete unbounded domain.

Shawn Eastwood (2013). Genetic Programming for the Evolution of Functions with a Discrete Unbounded Domain. UWSpace. http://hdl.handle.net/10012/7528