Towards a Sustainable Future: Courtyard in Contemporary Beijing 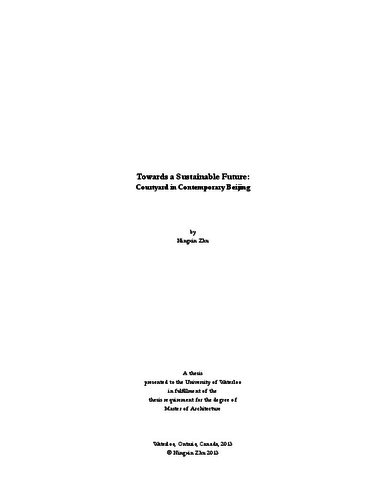 China has become one of the world’s economic engines. One major driving force is the rapid urbanization. Such fast development results in resource and energy depletion, pollution and environmental deterioration. The government has recently endorsed green buildings and urged ministries to work out a national action plan. It is predicted that green building will be the next big thing in China. But before importing any foreign green technology and green designs, is there something to be learned from the Chinese ancestors? In the long history of China, the Chinese have always employed a system of construction with the influences of geography, climate, culture, philosophy, economy and politics deeply rooted in China, making the Chinese traditional architecture distinct. Embedded in the formation of the city, siheyuan 四合院, the courtyard house in Beijing was one exceptional dwelling example that inherited the quintessence of the thousand years of building experiences and knowledge of the ancestors. This traditional urban type not only celebrated the rich and unique cultural heritage of China, it also played an important role in maximizing the natural forces to create a pleasant and comfortable environment for living. Population growth, political and economic reforms over time however have drastically changed the fate of this historical heritage. Especially under the pressure of the fast development and economic boom after the introduction of the Open Door Policy in 1978, the traditional courtyards were the first to be demolished due to the lack of modern facilities and the inability to accommodate the growing population. They were often replaced by apartment blocks and high-rise towers – imported types based on planning regulations developed in the West, outside the cultural and environmental milieu of Beijing. As a result, the city is now filled with many energy intensive buildings that eat away both the “city’s essence” and the valuable natural resources. With the current policy and ambition of China, the teardown courtyard sites within the old city wall that are still waiting for development offer the potential to address the remediation and reinterpretation of the traditional typology in a contemporary city. The thesis investigates the essences of the traditional courtyard house and explores the way to apply such qualities to the design of a new courtyard typology in contemporary Beijing. The proposal anticipates a holistic approach on both environmental, social, cultural and economic level, so as to carry out preservation that manifests in experience rather than physical restoration, and to create a project that is truly sustainable.