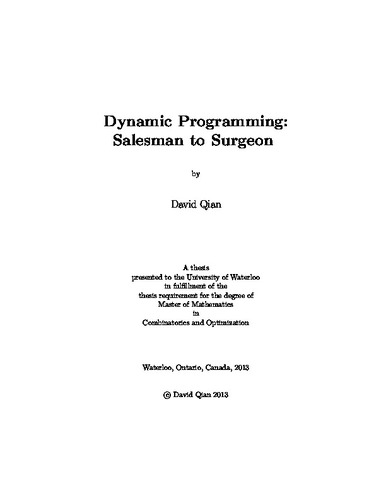 Dynamic Programming is an optimization technique used in computer science and mathematics. Introduced in the 1950s, it has been applied to many classic combinatorial optimization problems, such as the Shortest Path Problem, the Knapsack Problem, and the Traveling Salesman Problem, with varying degrees of practical success. In this thesis, we present two applications of dynamic programming to optimization problems. The first application is as a method to compute the Branch-Cut-and-Price (BCP) family of lower bounds for the Traveling Salesman Problem (TSP), and several vehicle routing problems that generalize it. We then prove that the BCP family provides a set of lower bounds that is at least as strong as the Approximate Linear Program (ALP) family of lower bounds for the TSP. The second application is a novel dynamic programming model used to determine the placement of cuts for a particular form of skull surgery called Cranial Vault Remodeling.