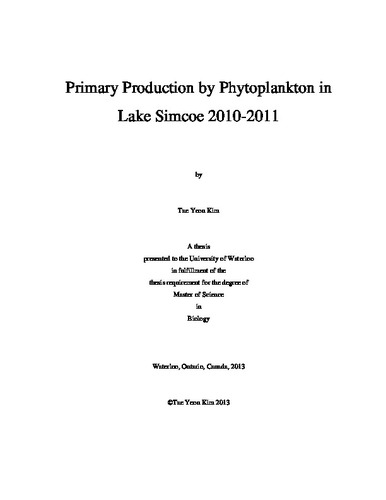 Degradation of water quality, introduction of dreissenid mussels (notably <i>Dreissena polymorpha</i>) and depletion of oxygen concentrations in the hypolimnion in Lake Simcoe, Ontario prompted a study of phytoplankton primary production to inform efforts to improve the lake conditions. The characterization of algal production is critical since, as primary producers, their biomass is positively correlated with production at higher trophic levels in pelagic food webs and oxygen levels. This study was conducted from August 2010 to August 2011, including the winter season (Dec-Mar). Temporally, the lake displayed a unimodal pattern with late summer to fall production maxima. For all seasons considered, the pelagic daily areal primary production (P<sub>int</sub>) was lower in the nearshore than offshore, consistent with the nearshore shunt hypothesis that mussels should be able to deplete phytoplankton more effectively in the nearshore. The sensitivity analysis revealed that chl a and the photosynthetic parameter P<sup>B</sup><sub>max</sub> were the most influential variables for explaining such spatial differences. The size distribution of chl a and production varied where both netplankton (>20µm) and nanoplankton (2-20µm) were greatest in fall and picoplankton (<2µm) was highest in summer and early fall. A large chl a peak of nanoplankton was also found in late-winter (Mar) at offshore stations. The seasonal areal primary production (SAPP; May-Oct) and chl a:TP were significantly lower nearshore than offshore, consistent with grazing impacts from the large nearshore dreissenid mussel community. The lake as a whole is quite productive comparable to other large lakes with comparable total P concentrations and dreissenid mussel populations. The latter part of the study showed that the deep chlorophyll layer (DCL) was not as frequent as expected and was detected only 28% of time during late-spring to summer when the lake was thermally stratified (Aug-Sept 2010 and May-Aug 2011). The percent dissolved oxygen (%) did not show any indications of elevated primary production in the DCL although the production estimates suggested that there is a substantial (an average of 55%) amount of primary production occurring below thermocline when a DCL exists. Whether or not the DCL has potential to nourish the benthic filterers (dreissenids) and has ecological significance in the lake remains unclear. Overall, the factors that control phytoplankton primary production in Lake Simcoe seem to operate somewhat differently from other large lakes and further investigation is needed to elucidate them. The analysis of primary production and biomass has improved knowledge of non-summer production and can provide guidance to site-specific P and oxygen remediation.