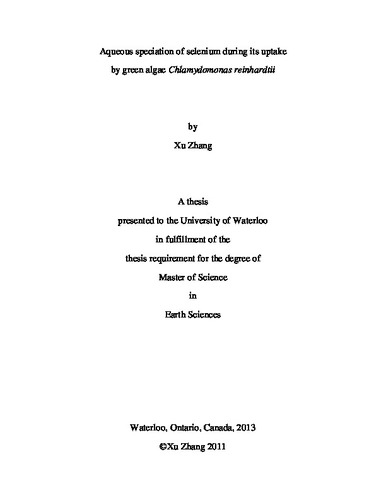 Selenium (Se) is a micronutrient, yet elevated Se can be toxic to aquatic organisms. The range of Se concentrations within which Se uptake goes from insufficient to toxic is very narrow. It is thus important to understand the Se biogeochemical cycle in aquatic systems. In this thesis, the study focuses on changes in Se speciation during uptake by green algae. An optimized method was adopted to quantify and speciate Se in water using flow-injection atomic fluorescence spectroscopy coupled with high-pressure liquid chromatography. Details on the method are given here. For the uptake experiments, the uptakes of four Se species (selenite (Se-IV), selenate (Se-VI), selenocystine (Se-Cys) and selenomethionine (Se-Met)) by the green algae Chlamydomonas reinhardtii were compared. This thesis reports that the algae take up higher amounts of organic Se than inorganic Se. Selenomethionine (Se-Met) had the most rapid uptake, during which Se-Cys was produced. For all experiments, Se-IV was produced and found to sorb onto the algae cells, revealing that Se-IV is an important intermediate compound. Mass balance calculations revealed that more than 90% of Se was lost during uptake, probably to the atmosphere. This study also investigated the release of Se during algae decay to simulate the fate of Se during early-diagenesis. Selenium-rich algae cells were mixed with estuarine sediments at the sediment–water interface in a series of column incubations experiments. During the 7-week incubations, Se speciation was measured at the water–sediment interface and in pore water samples. We found that all the Se released to the pore water was in the form of Se-Cys. Although preliminary, these results highlight the key role of organic-Se species in the biogeochemical cycle of Se in the aquatic environment.