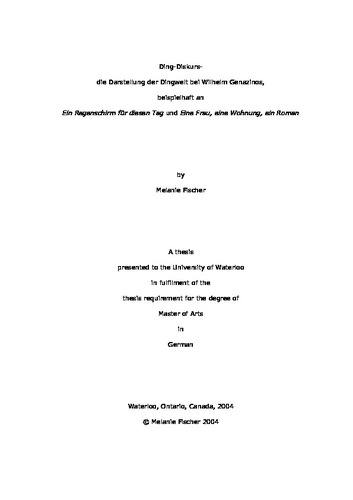 The following thesis examines the topos of "things" in literature. Herein we discuss concrete objects and how they are used and presented in contemporary prose. The primary works analyzed are both by Wilhelm Genazino, namely <i>Ein Regenschirm für diesen Tag</i> and <i>Eine Frau, eine Wohnung, ein Roman</i>, published in 2001 and 2003 respectively. The analysis of different "things" in the two novels by Genanzino affords one the opportunity of pursuing three different objectives. First, the topos is by its very nature an interdisciplinary one, and therefore the theoretical concepts from different disciplines are applied to the scholarly examination of "things" in literature. This theoretical framework is based on different aspects of the work of the philosopher Martin Heidegger, the media theorist Marshall McLuhan, the sociologist Norbert Elias, and the philosophical economist Karl Marx. Some specific characteristics of the presentation of "things" in literature such as "T&uuml;cke des Objektes" ("flaw of the object") and the fetishization of objects are also discussed. As a result, a new constellation of ideas is developed that has practical applications for the analysis of literature. The second goal of this thesis is to interpret the works of Wilhelm Genazino, a highly regarded author who has been largely ignored by literary scholars, by applying this new conglomeration of ideas. This interpretation concentrates on single concrete "things" that appear in the novels to establish their connotations for the narratives. "Things" become cultural or personal symbols, and the interpretation of them reveals another dimension to Genazino's prose. Last but not least it is shown that even small "things" (can) have a major impact in every form of media. This might well influence traditional interpretations of well known works in the literary canon. Four examples from world literature introduce the topic in order to give an overview of the different representations of the topos "thing". It becomes apparent that the symbolic meaning of things may change during epochs. Nevertheless these four examples introduce topoi, such as "transitorisches Objekt" ("transitional object"), which can also be found in the primary works of this thesis. The examples are taken from different epochs as well as from different cultural backgrounds to emphasize the intercultural premise of the theme. After introducing Genazino´s approach to the thing-discourse and defining his major ideas, a close reading that makes use of the analytical framework is employed to discuss and interpret the primary texts. It becomes apparent that "things", rather than plot or character, provide the major impetus to the narratives. The interdisciplinary approach of this thesis underscores the important contributions that an analysis of "thing discourse" can make to the study of literary texts and their importance to human existence. As the topic of discussion has been of intereset to scholars in several different scientific areas, it becomes clear that the interdisciplinary approach of analyzing texts may spread ideas concerning not only the works in question, but all disciplines involved as well.