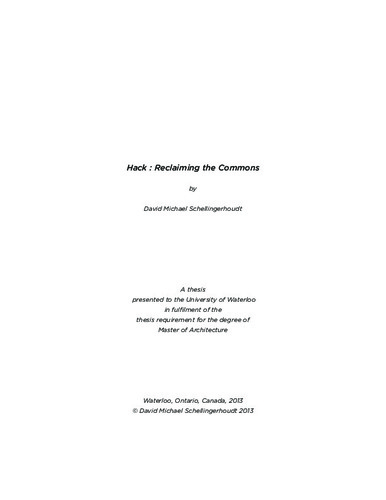 Architecture is an act of agency, and a technology that can be learned by anyone for their own purpose. It evolved as a system of organization and a protective shell for our fragile bodies, a vast, complex technology that enables human survival. Yet despite its universal nature, we have artificially limited our control over it, and who has access to it; we limit its potentials, its adaptive capacities, its diversity, and our continued survival. Walled-up in universities, behind certifications and dissertations, we have removed architecture from the public’s mind so that few understand it and use it. The city, in its surging complexity, is ever more opaque; the systems, infrastructure, and regulations that govern its formation are hidden from view, behind doors, walls, and fences. Hack seeks to make the city legible and architecture accessible, by leveraging a growing tide of hacker culture, and its subcultures – makers and DIY drone enthusiasts – and their respective technologies. Since the birth of the computer, Hackers have sought to democratize information technology held by military, government, and corporate interests. In doing so they’ve provided a number of methods, that enable free sharing and collaboration between individuals, distributing problem-solving practices, open-source systems, hands-on education, and free access to tools, all applicable to the challenges and opportunities facing architecture and city building today. Hack bootstraps itself to these ideals with hands-on experiments and reflections on those experiments, reframing architecture as a basic skill, a technology to be used by anyone, democratizing architecture through online communities, and the Hacker culture, in order to define a new active role for the architect. Internalizing the Hacker Ethic, and appropriate existing technologies to build new tools – devices to survey space, architecture and the city. – Hack traces the construction of a kite, a model car, a quadrocopter, and a remote-control airplane, each capable of gathering intimate information about the local environment. Hack concludes by reexamining the role of the aerial view in making cities and exercising power, speculating on the potential to level the fields of perception through online co-operation and these small-scale cartographic technologies.