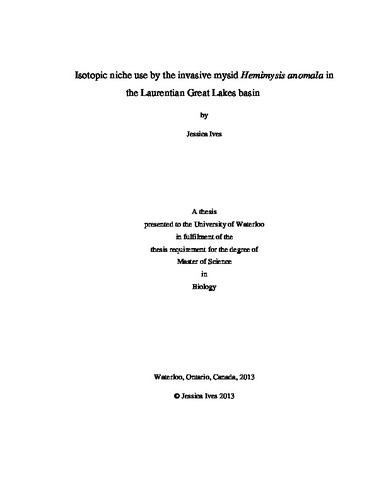 Invasive species are a known stressor on aquatic ecosystems, particularly in the waters of the Great Lakes basin. A recent invader, Hemimysis anomala, has had significant impacts on the food webs of Europe, where it invaded previous to its spread to North America. However, despite the fact that Hemimysis is now widespread in the Great Lakes basin, no analysis has been done on the trophic position of Hemimysis in North America invaded sites. This thesis used carbon (δ13C) and nitrogen (δ15N) stable isotopes to examine spatial and temporal patterns in Hemimysis trophic niche use in invaded North American sites in an attempt to broaden the knowledge base on this invader and to examine potential impacts this invader may have on the food webs of the Great Lakes. A spatial comparison of trophic niche use by Hemimysis among 13 sites in Lake Erie, Lake Ontario, and the St. Lawrence River was conducted between late July and mid-September of 2011. Main sources of carbon (benthic versus pelagic production) and trophic offset, or trophic distance from basal food web items, of Hemimysis were quantified using Hemimysis δ13C and δ15N values. Results indicated that: 1) Hemimysis relied predominantly on pelagic carbon sources at the majority of sites, and isotopic differences between life-stages existed at two of the 13 sites examined, 2) the trophic offset and reliance on pelagic food sources did not differ significantly between lotic and lentic sites, and 3) the isotopic niche width of Hemimysis was spatially heterogeneous, varying by an order of magnitude among sites, but was unrelated to the degree of isotopic variation in the basal food web at each site. Observed ranges in trophic offset and the pelagic fraction of dietary carbon indicate that Hemimysis derives carbon from both benthic and water column sources, as well as at multiple trophic levels. Results support the notion that Hemimysis is an opportunistic omnivore that displays significant dietary flexibility. To test the relative importance of key biotic and abiotic factors, taken from the literature, in driving Hemimysis isotopic variation, a temporal analysis was conducted at two North American sites, one in Lake Ontario and one in the St. Lawrence River, which were repeatedly sampled for Hemimysis and related food web items between September 2008 and January 2012. Seasonal patterns of winter enrichment – summer depletion were found in Hemimysis δ15N in Lake Ontario, but a similar pattern was not seen in the St. Lawrence River. Multiple regression models were used to determine the importance of water temperature, Hemimysis C:N ratios, Hemimysis length, and the isotopic values of basal food web components in explaining observed variation in Hemimysis δ13C and δ15N values. Significant relationships were found between Hemimysis isotopic values and water temperature, but relationships with the isotopic signatures of the pelagic basal food web were weak or nonexistent. Hemimysis δ13C values were significantly correlated with C:N ratios. Strong evidence of an ontogenetic dietary shift was found in Lake Ontario, with length showing a significant positive correlation with Hemimysis δ15N. All together the factors included in the models explained little of the observed variation in Hemimysis isotopic values, with approximately 20 % of the observed variation in Hemimysis δ13C, and just under half of Hemimysis δ15N variation, being explained by the included factors. As such, Hemimysis isotopic variation must be explained by factors not included in this study and may include factors such as species composition of the invaded site and availability of prey. Overall, the results of this thesis highlight the opportunistic and flexible nature of Hemimysis diet, and demonstrate the need for future work to determine the main drivers of isotopic variability and trophic niche selection of Hemimysis. The degree of trophic flexibility seen in Hemimysis implies that potential food web impacts will be site specific and heavily reliant on food web dynamics and environmental characteristics of the invaded site.