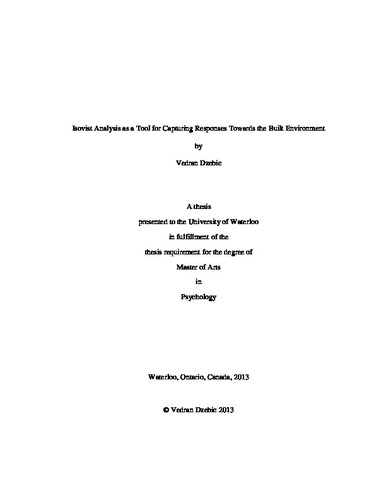 Experience of the built-environment is said to be dependent on visual perception and the physical properties of space. Scene and environmental preference research suggests that particular visual features greatly influence one’s response to their environment. Typically, environments which are informative and allow an individual to gain further knowledge about their surroundings are preferred. Although, such findings could be applied to the design process it is first necessary to develop a way in which to accurately and objectively describe the visual properties within an environment. Recently it has been proposed that isovist analysis could be employed to describe built-environments. In two experiments we examined whether or not isovist analysis can capture experience of real-world environments. In Experiment one we demonstrated that isovist analysis can be employed to describe experience of environment within a controlled, laboratory environment. In Experiment two we employed some of the methods of post-occupancy analysis to examine the robustness of the isovist approach and whether it would capture experience of a complex, real-world environment. The results of Experiment two suggest that isovist analysis could capture certain experiences, such as spaciousness, but failed to capture other responses. Regression analysis suggests that a large number of variables predicted experience, including previous experience with the building and the presence of other individuals. These findings suggest that experience of real-world, complex environments cannot be captured by the visual properties alone, but also highlight some of the other factors, such as presence of others and previous experiences may influence experience of built settings. Implications for the design processes are described.

Vedran Dzebic (2013). Isovist Analysis as a Tool for Capturing Responses Towards the Built Environment. UWSpace. http://hdl.handle.net/10012/7511