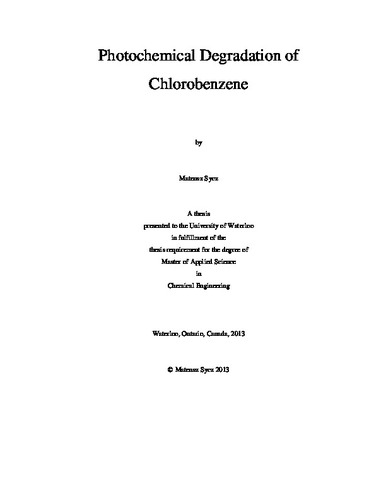 Persistent organic pollutants (POPs) are organic compounds of anthropogenic origin that have been linked to the development of cancer, neurobehavioural impairment, and immune system biochemical alterations. These chemicals have various industrial applications as well as acting as pesticides. Dioxins and furans are some of these compounds that are unintentionally produced in combustion and industrial processes. By definition these compounds have 4 common qualities: they are highly toxic, they are resistant to environmental degradation, they are introduced into the air and water where they travel long distances, and they accumulate in fatty tissues. Photochemical degradation is a method that has been extensively researched in the last few decades. In the aqueous phase it has already been shown to be able to degrade a number of refractory organics, such as dioxins and furans. The ultimate products of this process tend to be carbon dioxide, water, and mineral anions. Air phase work has been also gaining attention in recent decades as a possible alternative to incineration methods in air pollution control. The advantages of photochemical degradation processes are that they can be initiated at low temperatures, are relatively low cost compared to incineration processes, environmentally benign, and have the potential for quick and complete degradation of organic compounds. The main aim of the research is to investigate the photochemical degradation potential of PCDD/ PCDFs in gaseous air streams as a potential air pollution control technology. In order to do this, the photodegradation reaction kinetics were determined for chlorobenzene as a suitable surrogate for PCDD/PCDFs. Three different photodegradation schemes were employed: direct photolysis, UV/O3, and UV/H2O2. In addition, ozonolysis reaction rates were also determined to evaluate the effects of on the overall photodegradation rates for the UV/O3 process. Factors such as humidity levels and temperature were investigated to determine their effects on degradation rates. Temperature and humidity were not greatly influential on the degradation rates of direct photolysis. The degradation rate of chlorobenzene at a temperature of 100°C and high humidity was noticeably reduced, but unchanged at the 10% RH and 60% RH levels for all temperatures. Ozonolysis of chlorobenzene was negligible at 30°C for all humidity levels. Ozonolysis reactions at the 60°C and 100°C levels were higher than direct photolysis rates and in the 100°C case exceeded the UV/O3 degradation rates. Ozone coupled with UV experiments proved to be the most destructive at the low temperature of 30°C and molar ratio of 10:1 ozone to chlorobenzene. There was a clear and positive relationship between the amount of ozone present in the reactor and the degradation rate. At lower ozone to chlorobenzene molar ratios the degradation rates were not much higher than those for direct photolysis of ozone. The 5:1 molar ratio saw a significant increase in degradation rates over the photolysis rates. The fastest degradation rate was achieved for the 10:1 molar ratio and high humidity, which was over 10 times the rate of direct photolysis. In addition, humidity had a noticeably significant positive effect in these reactions. The effect of temperature on the UV/ozone reaction scheme was determined for the 5:1 ozone to chlorobenzene ratio. Temperature had an interesting effect on the degradation rates at higher temperatures. As the reactor temperature increased, the degradation rates from ozonolysis and UV/O3 began to converge at 60°C, ultimately leading to the ozonolysis reaction being faster than the UV/O3. Exploratory experiments for the H2O2 scheme were performed. H2O2 had a positive influence on the degradation rate of chlorobenzene and was about 26% higher than the direct photolysis rates. However for similar conditions, the UV/O3 process had higher degradation rates as was expected from the difference in absorption values between ozone and hydrogen peroxide.