Heritage Languages: The Case of German in Kitchener-Waterloo 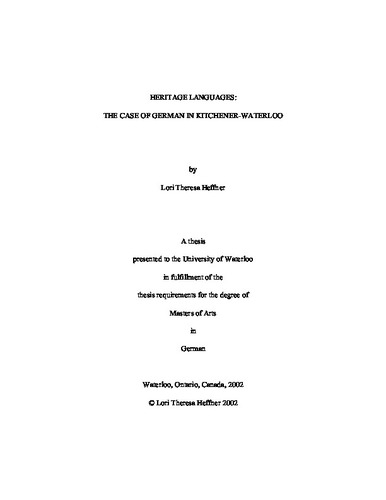 This thesis investigates the assimilation and/or integration of German families in Kitchener-Waterloo, Ontario into Anglo-Canadian culture. By administering questionnaires to and interviewing members in three three-generational families (n=29), different factors involved in an effort to ascertain what factors, if any, determine one's decision to pass on or continue learning German. The thesis proposes that if participants have a positive attitude towards German, i. e. , they see some use or value in it, then they will pass it on to the following generation. The first chapter outlines the aims of the study, methodology, and important terms. The second chapter describes previous research on the topic of immigrant integration in more detail, explaining the influences of external agents such as the government, school system, and media, and more 'internal' agents such as one's circle of friends and other social contacts as well as the family. The third chapter describes the three families and summarizes the main characteristics of each generation. Chapter four reports the results of the questionnaires and interviews. Chapter five, the conclusion, suggests which individual factors need to be studied further. The findings in this study suggest that there is no single factor which decides if those of German heritage decide to pass on their language or continue learning/using it themselves, or if they prefer to assimilate into Anglo-Canadian culture. Two factors did prove to be very important, namely the practicality of learning German, and how important one's heritage was to a participant. However, not even the presence of these two variables guaranteed a desire to continue learning German, demonstrating that numerous variables are taken into consideration when deciding whether to continue learning German and/or to pass it on to the next generation.