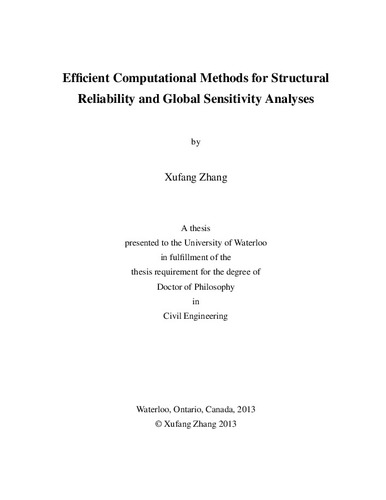 Uncertainty analysis of a system response is an important part of engineering probabilistic analysis. Uncertainty analysis includes: (a) to evaluate moments of the response; (b) to evaluate reliability analysis of the system; (c) to assess the complete probability distribution of the response; (d) to conduct the parametric sensitivity analysis of the output. The actual model of system response is usually a high-dimensional function of input variables. Although Monte Carlo simulation is a quite general approach for this purpose, it may require an inordinate amount of resources to achieve an acceptable level of accuracy. Development of a computationally efficient method, hence, is of great importance. First of all, the study proposed a moment method for uncertainty quantification of structural systems. However, a key departure is the use of fractional moment of response function, as opposed to integer moment used so far in literature. The advantage of using fractional moment over integer moment was illustrated from the relation of one fractional moment with a couple of integer moments. With a small number of samples to compute the fractional moments, a system output distribution was estimated with the principle of maximum entropy (MaxEnt) in conjunction with the constraints specified in terms of fractional moments. Compared to the classical MaxEnt, a novel feature of the proposed method is that fractional exponent of the MaxEnt distribution is determined through the entropy maximization process, instead of assigned by an analyst in prior. To further minimize the computational cost of the simulation-based entropy method, a multiplicative dimensional reduction method (M-DRM) was proposed to compute the fractional (integer) moments of a generic function with multiple input variables. The M-DRM can accurately approximate a high-dimensional function as the product of a series low-dimensional functions. Together with the principle of maximum entropy, a novel computational approach was proposed to assess the complete probability distribution of a system output. Accuracy and efficiency of the proposed method for structural reliability analysis were verified by crude Monte Carlo simulation of several examples. Application of M-DRM was further extended to the variance-based global sensitivity analysis of a system. Compared to the local sensitivity analysis, the variance-based sensitivity index can provide significance information about an input random variable. Since each component variance is defined as a conditional expectation with respect to the system model function, the separable nature of the M-DRM approximation can simplify the high-dimension integrations in sensitivity analysis. Several examples were presented to illustrate the numerical accuracy and efficiency of the proposed method in comparison to the Monte Carlo simulation method. The last contribution of the proposed study is the development of a computationally efficient method for polynomial chaos expansion (PCE) of a system's response. This PCE model can be later used uncertainty analysis. However, evaluation of coefficients of a PCE meta-model is computational demanding task due to the involved high-dimensional integrations. With the proposed M-DRM, the involved computational cost can be remarkably reduced compared to the classical methods in literature (simulation method or tensor Gauss quadrature method). Accuracy and efficiency of the proposed method for polynomial chaos expansion were verified by considering several practical examples.