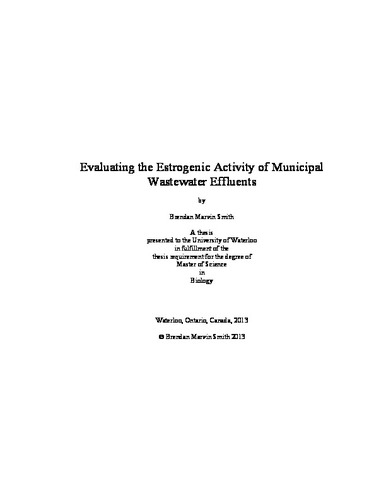 Municipal wastewater treatment plants (MWWTPs) are point sources of environmental contamination that can cause adverse effects on fish species exposed to their effluents (MWWEs). Contaminants, such as endocrine disrupting compounds (EDCs), commonly found in MWWEs have been shown to induce many adverse reproductive effects. In the Grand River watershed of southern Ontario, three MWWTPs from the cities of Guelph, Waterloo and Kitchener have been identified to adversely alter molecular and cellular responses in fish, which have been previously associated with exposure to estrogenic EDCs. Currently these systems are undergoing process upgrades to address aging infrastructure as well as expanding capacities to serve rapidly increasing populations. Studies in this thesis were conducted to determine whether the Guelph and Waterloo MWWEs, as well as surrogate pilot plant effluents that modeled possible treatment process upgrades for MWWTPs were estrogenic in vivo in controlled laboratory exposures. Unfortunately, the Kitchener MWWE (conventional activated sludge and lagoon) was acutely toxic and could not be included in laboratory exposures. Rainbow trout (Oncorhynchus mykiss) were exposed to 20% to 90% effluent from both Guelph and Waterloo, for 2, 8 and 14 days and fish plasma was analyzed for vitellogenin (VTG) a biomarker for estrogenic exposure. These exposures indicated that neither the Guelph nor the Waterloo MWWE were estrogenic in vivo under the exposure conditions in this study. In contrast the total estrogenic equivalence measured using the yeast estrogen screen (YES) of the Guelph, Waterloo and Kitchener MWWEs increased respectively, inversely related to the degree of treatment. Three pilot plant effluents (Burlington MWWTP) including conventional activated sludge (CAS), nitrifying with CAS (CAS-N) and biological nutrient removal with CAS (CAS-BNR) were also tested in rainbow trout in vivo for plasma VTG induction. Only the CAS-BNR effluent caused weak (2-3.5 fold) induction of VTG relative to controls. Although the estrogenicity (YES) of the effluent was variable the VTG induction corresponded with the slightly higher 17β-estradiol equivalents measured in these pilot plant effluents. An effect-directed analysis (EDA) for estrogenic substances was carried out on the Waterloo and Kitchener MWWEs and revealed that the estrogenicity (YES) of the Waterloo MWWE was associated with estrone, while the estrogenicity of the Kitchener MWWE was associated with several chemicals (estrone > 17β-estradiol > bisphenol A ~ testosterone).