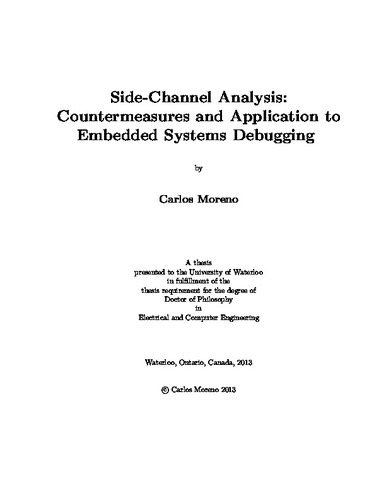 Side-Channel Analysis plays an important role in cryptology, as it represents an important class of attacks against cryptographic implementations, especially in the context of embedded systems such as hand-held mobile devices, smart cards, RFID tags, etc. These types of attacks bypass any intrinsic mathematical security of the cryptographic algorithm or protocol by exploiting observable side-effects of the execution of the cryptographic operation that may exhibit some relationship with the internal (secret) parameters in the device. Two of the main types of side-channel attacks are timing attacks or timing analysis, where the relationship between the execution time and secret parameters is exploited; and power analysis, which exploits the relationship between power consumption and the operations being executed by a processor as well as the data that these operations work with. For power analysis, two main types have been proposed: simple power analysis (SPA) which relies on direct observation on a single measurement, and differential power analysis (DPA), which uses multiple measurements combined with statistical processing to extract information from the small variations in power consumption correlated to the data. In this thesis, we propose several countermeasures to these types of attacks, with the main themes being timing analysis and SPA. In addition to these themes, one of our contributions expands upon the ideas behind SPA to present a constructive use of these techniques in the context of embedded systems debugging. In our first contribution, we present a countermeasure against timing attacks where an optimized form of idle-wait is proposed with the goal of making the observable decryption time constant for most operations while maintaining the overhead to a minimum. We show that not only we reduce the overhead in terms of execution speed, but also the computational cost of the countermeasure, which represents a considerable advantage in the context of devices relying on battery power, where reduced computations translates into lower power consumption and thus increased battery life. This is indeed one of the important themes for all of the contributions related to countermeasures to side- channel attacks. Our second and third contributions focus on power analysis; specifically, SPA. We address the issue of straightforward implementations of binary exponentiation algorithms (or scalar multiplication, in the context of elliptic curve cryptography) making a cryptographic system vulnerable to SPA. Solutions previously proposed introduce a considerable performance penalty. We propose a new method, namely Square-and-Buffered- Multiplications (SABM), that implements an SPA-resistant binary exponentiation exhibiting optimal execution time at the cost of a small amount of storage --- O(\sqrt(\ell)), where \ell is the bit length of the exponent. The technique is optimal in the sense that it adds SPA-resistance to an underlying binary exponentiation algorithm while introducing zero computational overhead. We then present several new SPA-resistant algorithms that result from a novel way of combining the SABM method with an alternative binary exponentiation algorithm where the exponent is split in two halves for simultaneous processing, showing that by combining the two techniques, we can make use of signed-digit representations of the exponent to further improve performance while maintaining SPA-resistance. We also discuss the possibility of our method being implemented in a way that a certain level of resistance against DPA may be obtained. In a related contribution, we extend these ideas used in SPA and propose a technique to non-intrusively monitor a device and trace program execution, with the intended application of assisting in the difficult task of debugging embedded systems at deployment or production stage, when standard debugging tools or auxiliary components to facilitate debugging are no longer enabled in the device. One of the important highlights of this contribution is the fact that the system works on a standard PC, capturing the power traces through the recording input of the sound card.