Modelling the Dynamics of Mass Capture 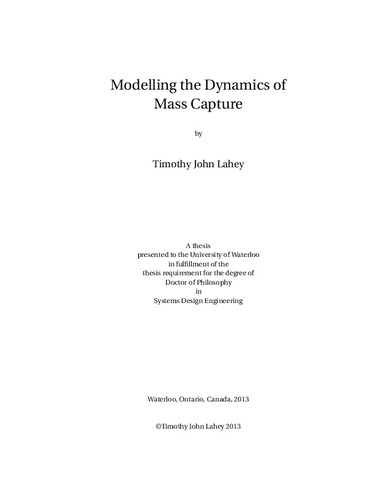 This thesis presents an approach to modelling dynamic mass capture which is applied to a number of system models. The models range from a simple 2D Euler-Bernoulli beam with point masses for the end-effector and target to a 3D Timoshenko beam model (including torsion) with rigid bodies for the end-effector and target. In addition, new models for torsion, as well as software to derive the finite element equations from first principles were developed to support the modelling. Results of the models are compared to a simple experiment as done by Ben Rhody. Investigations of offset capture are done by simulation to show why one would consider using a 3D model that includes torsion. These problems have relevance to both terrestrial robots and to space based robotic systems such as the manipulators on the International Space Station capturing payloads such as the SpaceX Dragon capsule. One could increase production in an industrial environment if industrial robots could pick up items without having to establish a zero relative velocity between the end effector and the item. To have a robot acquire its payload in this way would introduce system dynamics that could lead to the necessity of modelling a previously ‘rigid’ robot as flexible.