Foreign travellers’ recommendation of culinary tourism in India based on cuisine image and satisfaction with experiences at culinary establishments: an exploratory study 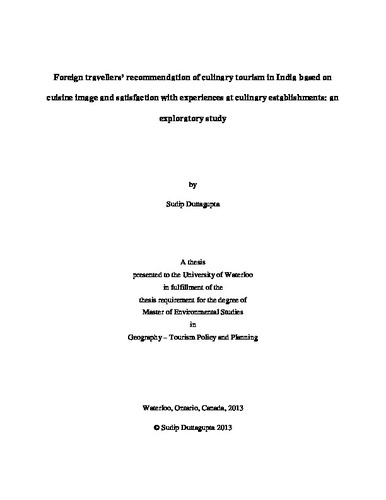 The role of food in tourism has recently received increased attention within the spheres of destination marketing, tourism development, and academia. Cuisine appreciation is an indelible aspect of the holistic, polysensual experiences that travellers seek thesedays (Crouch & Desforges, 2003; Everett, 2009). The experience of cuisine is the overarching theme for this study. It addresses a contextual gap concerning the concepts of image, satisfaction, and behavioural intentions (which have been abdundantly researched from a destination perspective) applied to cuisine and the travel experience, in India. Specifically, this study’s purpose was to determine foreign travellers’ likelihood to recommend India for culinary tourism based on their perception of its cuisine and satisfaction levels with culinary experiences during their travel to the country. Additional aspects of the culinary behaviour of foreign travellers to India, such as their frequency of patronising Indian culinary establishments, types of establishments they visited, key sources of cuisine knowledge, and their opinion on cuisine knowledge based on culinary experiences in the country, are also revealed in the study. As well, the study incorporated a comparative analysis between how Indian cuisine is perceived vis-à-vis Thai, another globally popular cuisine. A cross-sectional quantitative research design was employed in this study. A questionnaire comprising of six-point Likert scale questions for cuisine image, satisfaction with culinary establishments, and recommendation for culinary tourism, and a combination of additional close and open-ended questions was posed to a convenience sample of foreign travellers to India. Data analyses consisted of frequency analyses, and parametric and non-parametric tests to address the research questions and establish correlations between the study’s central concepts. The results indicate that the sample of foreign travellers’ perception of Indian cuisine was positive overall and equivalent in comparison with that of Thai cuisine. A majority of respondents were satisfied with their culinary experiences in the country and recommended India for culinary tourism, in spite of the culinary challenges faced. The results also indicate that cuisine experience featured prominently as one of the most enjoyable aspects of their trip and that foreign travellers patronised Indian culinary establishments on a frequent basis. Respondents used affective as well as cognitive sources of cuisine information and a majority felt that culinary experiences in India had an ameliorative effect on their overall cuisine knowledge. This study carries particular pertinence in light of recent efforts on the part of the Ministry of Tourism, India to promote culinary tourism as a distinct tourism segment. Although the study cannot claim to be wholly conclusive as it is limited to a small convenience sample, the results provide valuable insight on this previously under-researched topic. Acknowledging the aforementioned caveat, implications and recommendations for three stakeholders are presented: culinary tourism marketers, owners/managers of culinary establishments, and the academic community. It is suggested that stakeholders contextualise the learnings from this study to their unique needs from a culinary tourism promotion and managerial standpoint. Being that this is an exploratory study, further research is recommended to explore the nuances of the study’s central themes with respect to phenomenon of culinary tourism.

Sudip Duttagupta (2013). Foreign travellers’ recommendation of culinary tourism in India based on cuisine image and satisfaction with experiences at culinary establishments: an exploratory study. UWSpace. http://hdl.handle.net/10012/7503