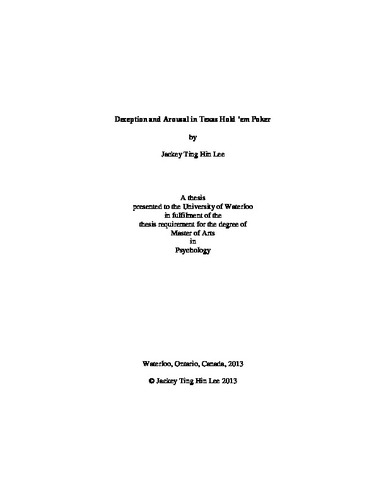 In our pilot study investigating Texas Hold ‘em poker, we found that players bluffing (with a losing hand) elicits a similar physiological arousal response (as measured by skin conductance levels) to those in a position of strength and poised to win. Since arousal has been suggested to be a reinforcing factor in problematic gambling behaviour, we sought to replicate the findings of our pilot study in the current investigation. We aimed to extend our previous findings further by: isolating truthful betting (strong betting) to disambiguate deception when players are in positions of strength (i.e. trapping), measuring subjective excitement levels and risk assessments, investigating the physiological arousal responses following wins versus losses, and finally, exploring group differences (i.e. problem gambling status, experience levels). 71 participants played 20 naturalistic rounds of Texas Hold ‘em poker for monetary rewards. We were able to replicate our previous findings that bluffing triggers a physiological arousal (as measured by skin conductance responses) similar to truthful strong betting. Trapping was also found to elicit a skin conductance response similar to both bluffing and strong betting. Measures of subjective excitement revealed a pattern that converged with physiological data. Furthermore, wins were found to be more arousing than losses. Finally, our exploratory analysis of group differences (i.e. problem gambling status, experience) proved to be an insignificant factor with all measures. We conclude that the effect of bluffing on physiological arousal is so powerful that it pervades all participants; which is problematic due to its risky nature and potential to be self-triggered. With its ever increasing popularity and availability, more research on Texas Hold ‘em poker is warranted for treatment implications.