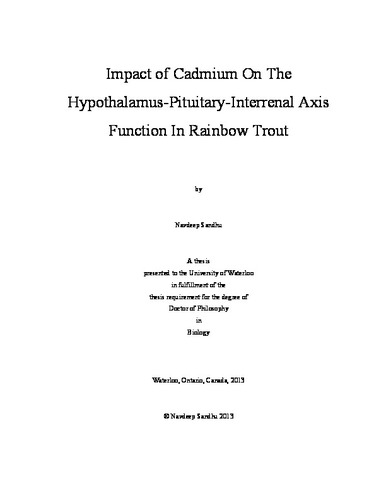 Cadmium (Cd) is a nonessential metal present in sublethal concentrations within the aquatic environment. Cd is an endocrine disruptor and high concentrations of this metal suppress stressor-induced cortisol production in fish. However, few studies have examined the effect of Cd at concentrations that are environmentally relevant on the functioning of the hypothalamus-pituitary-interrenal (HPI) axis. The HPI axis activity is essential in the stressor-induced cortisol production, a highly conserved adaptive response to stress in vertebrates. Elevation of plasma glucose in response to a rise in plasma cortisol is mediated through steroid activation of glucocorticoid receptors (GRs), but the mechanism of action of Cd in disrupting target tissue cortisol action is not known in fish. The overall objective of this thesis was to examine the impact of sublethal and environmentally relevant levels of Cd on the stress response and target tissue metabolic capacities, and to investigate the mechanisms of action of this metal in disrupting cortisol production and target tissue cortisol action in rainbow trout (Oncorhynchus mykiss). The impact of subchronic exposure to environmentally relevant levels of Cd on metabolic capacity and stress performance was identified through a 28 day (d) in vivo exposure of juvenile rainbow trout to either of two Cd concentrations (0.75 µg/L or 2.0 µg/L). During the exposure period, juvenile rainbow trout accumulated Cd within the liver, kidney and gills, but were able to adapt to exposure concentrations as no changes were observed in plasma cortisol, glucose and lactate levels. However, changes in abundance of mRNAs encoding proteins involved in corticosteroidogenesis, including melanocortin 2 receptor (MC2R), steroidogenic acute regulatory protein (StAR) and P450 side chain cleavage enzyme (P450scc), and liver GR protein expression suggesting endocrine disruption over the 28 d period. Also, target tissue metabolic capacities, including lower liver glycogen content and changes in intermediary metabolic enzyme activities in the liver and gill, were compromised by the 28 d exposure to Cd. The response to a secondary handling stressor at either 7 or 28 d exposure was attenuated suggesting that subchronic exposure to low levels of Cd disrupts the highly conserved adaptive stress response in rainbow trout. Upon further investigation using in vitro head kidney slices exposed to 0, 10, 100 or 1000 nM of Cd and stimulated with adrenocorticotropic hormone (ACTH), a similar inhibition of cortisol production was observed, as demonstrated in vivo, suggesting that Cd disrupts interrenal corticosteroidogenesis in fish. The impact of Cd on ACTH-stimulated cortisol production involved the suppression in the abundances of MC2R, StAR and P450scc transcripts. This response was also mimicked when head kidney slices from 7 d Cd exposed fish were incubated ex vivo with ACTH confirming that interrenal tissue is a key target for endocrine disruption by Cd. In both the in vitro and ex vivo incubations of head kidney slices 8-Bromo-cAMP (a cAMP analog) completely abolished the Cd-mediated cortisol inhibition demonstrating for the first time that Cd disruption of corticosteroidogenesis is occurring upstream of cAMP production. Further investigation of Cd-mediated impact on MC2R showed alterations in MC2R mRNA transcripts during in vivo exposure after 7 days and an attenuation of MC2R mRNA levels after Cd-exposed fish were subjected to a handling stressor. Disruptions in the mRNA abundance of MC2R was associated with disruptions of melanocortin receptor accessory protein 1 (MRAP1), but not MRAP2; a phenomenon that was also observed in ex vivo head kidney slices. Cell transfection studies confirmed that rainbow trout MC2R/MRAP1 receptor complex displayed decreased activity in the presence of Cd. Taken together these results suggest that Cd directly targets the MC2R/MRAP1 complex to inhibit ACTH-stimulated cortisol production in juvenile rainbow trout. In addition to Cd inhibiting interrenal steroidogenesis, the results also suggest that Cd may impact the negative feedback regulation of cortisol through the suppression of brain mineralocorticoid receptor (MR), but this requires further investigation. At the target tissue level, Cd by itself did not significantly affect liver metabolism, but inhibited the cortisol-induced glucose production in liver slices. This involved suppression of GR protein expression along with the suppression of GR-responsive genes, including phosphoenolpyruvate carboxykinase (PEPCK) and suppressor of cytokines signaling 1 (SOCS1) and changes in enzyme activities, including hexokinase, glucokinase, pyruvate kinase and PEPCK, pointing to a disruption in liver GR signaling by Cd. Altogether, Cd exposure disrupts the organismal stress responses in juvenile rainbow trout. Furthermore, Cd impairs the ability of juvenile rainbow trout to respond to a secondary stressor, which is a vital adaptive process that is fundamental to successful stress performance. Most importantly, these studies highlight for the first time that disruption of the HPI axis to attenuate cortisol production occurs at the level of the MC2R/MRAP1 complex, suggesting that the mechanism of action for attenuation of cortisol occurs at the level of MC2R activation. Also, GR signaling is a key target for Cd and may be a mechanism leading to altered metabolic capacities in stressed fish from Cd-contaminated sites. Overall environmentally relevant levels of Cd disrupt cortisol production and target tissue action of this steroid in rainbow trout.