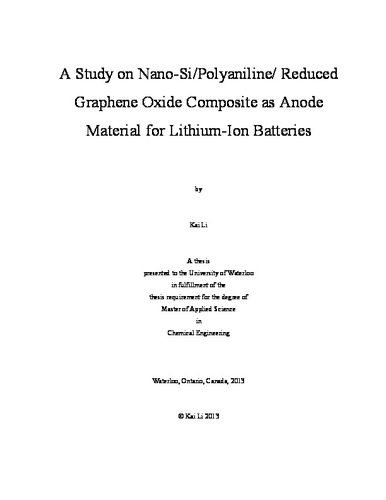 Because of its high theoretical specific capacity (4200mAh/g) and natural abundance (2nd most abundant element on earth), silicon is considered a promising anode candidate for high energy density lithium-ion batteries. However, the dramatic volume changes (up to 400%) that occur during lithiation/delithiation and the relative low electrical conductivity of silicon prevent the implementation of this material. In this work, a nano-silicon/polyaniline/reduced graphene oxide composite was synthesized via a two-step process: in-situ polymerization of polyaniline (PANi) in the presence of nano-silicon followed by combination of the prepared n-Si/PANi binary composite with reduced graphene oxide (RGO), to form a n-Si/PANi/RGO composite. Electron microscopy reveals the unique nano-architecture of the n-Si/PANi/RGO composite: silicon nanoparticles are well dispersed within a PANi matrix, which in turn is anchored to the surface of RGO sheets. The n-Si/PANi/RGO ternary composite delivered an initial capacity of 3259 mAh/g and 83.5% Coulombic efficiency. The new composite displayed better rate performance and capacity recovery than either nano-Si or n-Si/PANi. Structural and morphological studies combined with AC impedance analysis suggest that the n-Si/PANi/RGO composite has higher electrical conductivity than the other two component materials, yielding better performance at high current densities or C rates. The good rate performance, high initial specific capacity and stable Coulombic efficiency of n-Si/PANi/RGO make it a promising anode material for high energy density lithium-ion batteries.