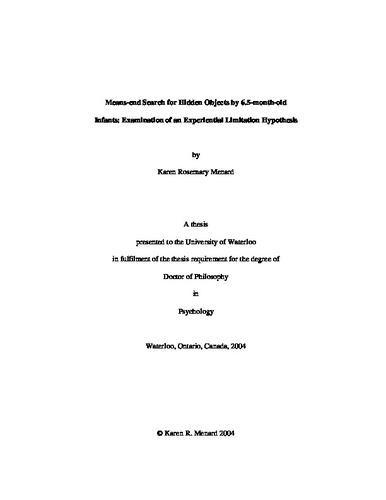 Three experiments were conducted to investigate the hypothesis that young infants? failures to search for occluded objects arises, not from deficiencies in their object representations, but from limitations in experience with the physical world. Successful means-end search is typically found at 8 months of age and is traditionally taken as the hallmark of object permanence. However, recent evidence suggests that infants much younger than 8 months of age are able to represent and reason about objects that are no longer visible. In Experiment 1, successful means-end search was found for 8. 5-, but not 6. 5-month-old infants in a traditional task, but younger infants showed successful search ability when the task was made familiar to them in Experiment 2 (i. e. , when the toy and occluder are first presented as a single composite object), and when they were given the opportunity to watch a demonstration of the solution to the task in Experiment 3. These results are taken as evidence for the ?experiential limitation? hypothesis and suggest that young infants are more apt at solving manual search tasks than previously acknowledged.