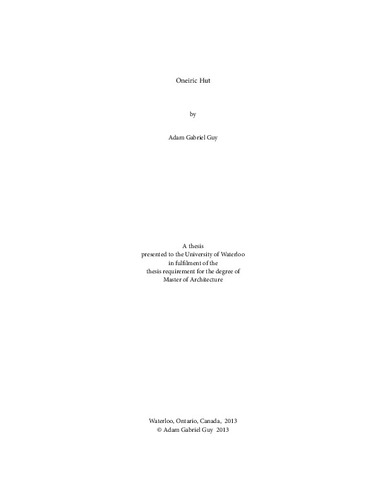 I set out to learn something basic about architecture, something foundational on which to situate the conceptual and rhetorical exercises played within the studio. In settings both academic and professional I had been encouraged to reduce my study of architecture to a cerebral and retinal game of sorts played out via ever-increasingly seductive imagery. It seemed apparent that in order to think about architecture I should have been involved in an act of architecture. My intentions, albeit naïve, were to engage architecture on its own terms, through its own medium, to return to first principles, if there ever were any, and to acquire a form of embodied architectural knowledge inseparable from its material becoming. There was no amount of hypothesizing, theorizing, no amount of digital sophistication that could supplant the basic educational experience gained from involving myself with real materials, in a real place, with a fully engaged being. With this in mind I journeyed into Ontario’s North, with little more than a hammer and saw and a desire for experience, that most brutal of teachers. I would engage in a basic act of building as a method of acquiring a deeper understanding of the subject I had been studying for several years yet whose essence I felt I knew very little about. The resultant document, informed by traditions of the primitive hut, records a journey towards architectural embodiment; it resides as an argument for the reintroduction of embodied forms of learning into the education of the architect.